Vikram is on his way back to Osiris but what he will be returning to is uncertain. The city has been invaded by several warring nations, each laying claim to Osiris, each refusing to back down. For the Osirians, the arrival of the strangers, people from an outside world they never knew existed, brings hope as well as destruction. Perhaps, in the face of common enemies, the East and West factions can finally work together and perhaps Adelaide Rechnov, the Silverfish, is the woman who can bridge that gap. Vikram and Adelaide, each believing the other to be dead, are now on course to cross paths again but their survival and the survival of everything they hold dear, depends on the outcome of political discussions. What do the fates of two people matter when a whole world is at stake? ‘Tamaruq’ is the concluding part of ‘The Osiris Project’ by E.J. Swift and it’s a series I find myself sad to have finished. Like everything else, it has its flaws, but I’ve thoroughly enjoyed visiting the world that Swift has created. I’ve fallen in love with her characters and found myself turning page after page to see what happens to them. It was all depicted so vividly that I found it to be a really immersive series.

Swift’s characters have changed a great deal over the course of the trilogy and this final instalment sees both Vikram and Adelaide much wearier than they used to be. They’ve both face hardships and loss and have found themselves in new and at times alarming situations, and both seem to have figured out who they really are. Their love story is very much a Romeo and Juliet kind of affair, crossing boundaries of social class to find common ground but, unlike Shakespeare’s tragic young couple, we’re granted the opportunity to follow Vik and Adelaide as they continue with life believing the other to be dead. It’s really sad at times, yet also thoroughly believable as they try to do what they think the other would have approved of.

That makes this sound like a love story, which it isn’t or at least that isn’t the only facet to this story. I think that a lot of the actions we see are motivated by love for a partner, for a homeland, for children but they’re all set across this vast geographical and political backdrop with scheming and machinations everywhere you turn. The differences between the locations and the political factions has been very thoroughly thought out and it’s always easy to follow who is doing what and to understand why they’re doing it. There’s a great balance between the macro- and micro-scale elements of ‘Tamaruq’, setting the actions of a few individuals against the actions of nations. It’s a wonderful blend and it makes for an engaging plot.

My one criticism for this book and perhaps it’s more a criticism of the series as a whole is that at the start it was quite hard to pick up what Adelaide was doing and when it was set in relation to the events of book two, ‘Cataveiro’. In that second book we don’t see Adelaide at all but follow Vikram and other characters in and around the city of Cataveiro, far away from Osiris. At the start of ‘Tamaruq’, we pick up with Adelaide seemingly where book one, ‘Osiris’ finished and it’s pretty difficult to match up the timelines of her and Vik to put things in perspective. I don’t know how I’d have solved that and it’s a small issue that I was happy enough to work around but it was a bit confusing at the start.

However, if the worst I have to say was that I found it a bit awkward to match the character timelines up for a few chapters, then I’d say Swift isn’t doing too bad a job. I would love to read more in this world and hope that Swift has a few more stories up her sleeve yet. It was a brilliant setting with wonderful characters and I’d really like to go back to Osiris one day to see how they’re all doing. 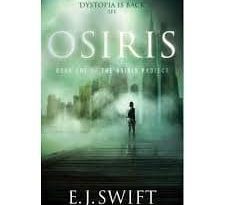 Osiris (Book One Of The Osiris Project) by E.J. Swift (book review).

Osiris (Book One Of The Osiris Project) by E.J. Swift (book review).