As author Roger A. Sedjo points out in his introduction to ‘Surviving Global Warming’, we’ve known global warming and climate change has been happening since the 1980s and simply haven’t done enough to curb it. We’ve seen rapid changes in the weather this year so we should all know something’s going on. Sedjo points out that the Earth has always had fluctuating ice ages but this one is man-made. Sedjo is more than qualified for this book, sharing the 2007 Nobel Peace Prize for his work on the IPCC Climate Assessments. 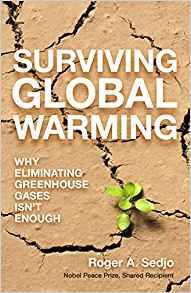 One of the key problems Sedjo goes over is the use of coal as a fuel which its bi-products are fuelling the global warming. Years ago, I came across a list of products that coal is used in with a larger profit margin. If the nations using coal were encouraged to think that way, they might find alternatives for generating energy. I’m still waiting to hear of thorium nuclear energy plants.

Reading Plan B, it’s pretty obvious as coal-based energy country-wide in China and India is seen as a major backward step and problematic in both circumstances, let alone the pollution it will cause. Both see it as a means to supply electricity cheaply to their populations and the imposing will of other countries who no longer use or have cut back on using coal doesn’t really rub it. I would think it makes more sense for the other countries to offer better alternatives and technology simply because deeds not words are needed now.

Plan B focuses on the rising sea level as well. If you think the current bad weather has no ending, think what happens when the oceans rise by 4 feet (metric sizes are available)! All coastal resorts will be hit and everything at sea level will have to move inland. New bridges are already being considered with this in mind but those of you who live by the sea need to have a serious think.

Don’t think this book is all about restricting activity. Chapter 5 focuses on turning waste products into something more useful. Interestingly, erupting volcanoes can tackle excess carbon dioxide. Unfortunately, the sulphur dioxide would certainly kill most of the wildlife, including us. The ocean-life krell makes use of carbon dioxide but the warm waters, which we are getting from global warming, is killing them off and upsetting the food chain which ultimately will affect us. We really need better education at school in biology and ecological systems and then re-enforce it with the adult population.

There is also a reminder for every tree taken down that they should be replaced with new ones to maintain the status quo. I would also add to that if this isn’t done, we also risk losing the vital soil that sustains vegetation as it gets washed away by rain and floods. When you consider so many of the poorer counties people doing this, you can’t help feel this is like a slow suicide.

Sedjo makes a comparison to insurance plans in having a prepared contingency in his penultimate chapter but neglects one factor ie there will always be some people who ignore such schemes, like the current president of the USA. If anything, the United Nations needs to do more in getting countries to work together on doing this faster than at the last minute. The Kyoto Protocol made some movement and the Paris Agreement set up targets that need to be achieved. I think an extra problem is people are getting too used to having things done immediately and solving global warming is going to take more decades than it took to create the problem. There is no fast cure.

There’s a lot to digest in this book and some areas are more technical than others. I’m not entirely convinced that this is a book for the man in the street as there needs to be a more basic form that they can understand. I’m trying very carefully not to say ‘simple’ but its more to do with explaining the consequences of not doing anything at all. I’m surprised we haven’t seen more Hollywood films lately about the consequences of global warming as people do tend to remember movies and we definitely need to emphasise that there is no happy ending if we go on the way that we are.

When I did my final polish of this review, I noted the number of times I was adding my own comments so I can also add to that this book should make you think which is good because you don’t want to be a passive reader. If it makes you come out angry at the ineptness of your governments to do something then it should make you become more proactive.