At the present time, Urban Fantasy as a sub-genre of standard fantasy is still on a high. As a result, there is plenty to choose from. The problem is how to decide what is worth reading? This may depend on the direction you approach it from. Vampires have come a long way from the days of the villainous and evil Count Dracula. Bram Stoker’s book had its roots in the morality of the time, when many Victorians considered all women as potential seducers and the hand-maidens of Satan. The role of women in society has also changed a lot since then. Vampires have morphed into dangerous but glamorous creatures and it is the women whose innocence is now in danger. Along the way, the genre has picked up a few were-creatures in starring roles but the lesser immortals (other than the Sidhe who have always populated folklore) don’t usually get much more than a walk-on part. Richelle Mead’s central character is a succubus. Georgina Kincaid has been in the service of Hell for over two thousand years. Born an ordinary mortal, she betrayed the man she loved but to try and alleviate the pain she had caused him, agrees to the contract which made her a succubus in return for everyone she had ever know forgetting she ever existed. Since then her role has been to seduce men and steal part of their souls. Now in the present day, she has a day job as well as her infernal one. It used to be the assistant manager of a bookshop, now she is an elf in a Christmas grotto.

Georgina’s problem is that she is too kind-hearted to be a very efficient succubus and it didn’t help that she fell in love with a mortal with a very pure soul. For several novels, she has done her best to avoid Seth Mortensen as she doesn’t want to damage his soul. By the start of ‘Succubus Revealed’, the sixth and last book in this series, they have come to an arrangement. By rationing sex, she can lengthen they time they have together. Eventually, her nature will leach all of his soul and he will die. This is frustrating for both of them. Then her demonic boss informs her that she is being transferred to Las Vegas. Once she said that her dream job would be as a dancer in that city and the powers that be have given it to her. Her friends begin to suspect that this is a sinister plot to keep the lovers apart and begin to investigate the background to the move.

In previous books, Georgina has been the prime mover behind the action, working out the solutions to the problems that have beset her and her friends. In this, she is a passive character. Things happen to and around her. The mayhem she usually leaves in her wake is sadly missing, making what should have been an exciting climax to an excellent series seem a trifle tame and a touch predictable when all the clues have been seeded in earlier volumes are brought together. Georgina has unfortunately lost her vitality. It us a shame that such a bold, dynamic series has to end in such a relatively passive and cosy way. 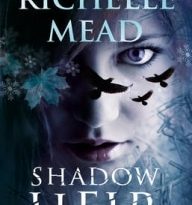