Conspiracy plots tend to be border-line with SF these days, more so as so much SF is far into the future than current times. Then again, with at least 18 months to 2 years before a book sees print, any modern day conspiracy plot can quickly become dated these days if you want to include it in a story. Saying that, I was surprised at several more recent ones in the past few decades that did pop up. Even so, historical conspiracies are still the fodder of SF, if only in time travel stories. The TV series ‘Timeless’ has still shown them to be popular. 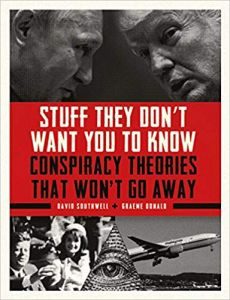 This book, ‘Stuff They Don’t Want You To Know: Conspiracy Theories That Won’t Go Away’ by David Southwell and Graeme Donald, is an illustrated guide through them. Divided into ten chapters that over-lap on some subjects and secret organisations and alien conspiracies are bound to appear in various categories. It’s enough to make you think that there is a bigger plan going on out there. Both authors seem to prefer to present evidence for and against but leave it to you, the reader, or me in this case, as to what you believe from what is shown. In their introduction, they do think some things do get out of hand with more belief than proof, so pay attention when you read. If I have to be critical, then I wish they had more than a paragraph of their conclusions.

The one worry I had with the opening chapter on politics is that they aren’t placed historically. When you have references to the Kennedy assassination and that appears later in the chapter, this does suggest a little muddled thinking. Placing things in historical context would give a better measure of the growth of some plots. It does come up-to-date with a look at Donald Trump’s connections to Russia which should make you think. Going back to JFK, I hadn’t realised the guns involved kept being changed before.

The number of times that the so-called secret societies of the Freemasons and the Illuminatii crop up in various conspiracies makes me wonder how they can keep the term ‘secret’ if people know about them. The main thing not really known is their full membership and who exactly unless, with the Masons, you’re on square and know the handshakes or how much influence they have in the world of business. Considering some of the atrocious behaviour of some powerful businessmen in recent years, you do wonder if these particular people ever belonged to them in the first place.

Some myths do need to be cleared up as shown in this book. The existence of AIDS goes back to the 1930s and isn’t a modern day phenomenon and in Africa was called the ‘Thin Disease’. If anything, there needs more work on this to find how the people survived. On the other hand, SARS was a man-made disease. The Gulf War Syndrome (GWS) certainly falls into that category, too. After all, something must be going on when only the French troops who didn’t take the inoculations didn’t get GWS. Personally, I do think it was the combination of the inoculations than deliberate intent as what country would put its own military at risk in the middle of a war?

The look at 9/11 does miss out an important detail. When George W. Bush became the American President, he vowed to cut back on the USA’s involvement in aiding foreign countries. That would have been a red or wavy flag to a bull to the likes of al Qaeda that they did not like being ignored and presented a nasty swipe back.

There is one odd contradiction. Under ‘Barcodes’, it is pointed out that the number of the beast is 666, yet under the subsequent piece, ‘Subliminal Messages’, it is given as 616. Does the devil have a dialling code?

Speaking of ‘Subliminal Messages’, although very fast screen flick messages have been shown not to work, has anyone given any thought to the number of adverts you see of the same product over a few weeks promotion influencing your choice to buy their product or not?

It’s hardly surprising that the Bermuda Triangle pops up, although the authors don’t point out that the major shipping lanes all pass through the area so there’s bound to be a bigger proportion of shipwrecks there than elsewhere anyway.

When it comes to the chapter on ‘Places’, some of which I haven’t come across before, I thought it time to look them up on the Internet. I’m not sure I’d want to visit them even if I could but I can see why they would attract people.

The more I kept reading, the more I wondered how conspiracies can be hidden in the Internet age. Even with the best security precautions, someone is bound to say something sooner or later and remove a conspiracy. I mean, a lot of the earlier UFO sittings have now been put down to experimental aeroplanes. Not all, grant you, but military intelligence saw it as an ingenious way to hide the truth. Saying that, only the Aurora Project seems to be missing here.

I’m only scratching the surface of various things I’ve read in this book. I thought for a while that I would spread reading the chapters over a longer period but ended up with an intense week of reading so it certainly kept my attention throughout.

With conspiracies, anything that has a hint of mystery tends to bring out the usual suspects and if I was to widen the criteria for a follow-up book, then it would be to look at these organisations or aliens in more detail so as to explain why it’s always them and no others. Considering the number of times the Mafia pops up and their omerta or code of silence has been broken, you would think someone high up with have revealed something over the years on their potential involvement in some of the above.

To keep the lid on anything anymore has to be a lot harder. People just like talking more these days, especially on the Internet, it would be a lot harder to keep anything quiet for long. Conspiracies need few people involved and more speculation. That doesn’t mean it still can’t happen but longevity is more of an issue these days. If the past choices are still out there, then they must rear their heads eventually.