‘Starship Century: Towards The Grandest Horizon’ should be on your must read booklist for this year. The material is garnered from the ‘2011 100 Year Starship Symposium’ and all proceeds from this book will be donated to research on interstellar travel. There are twenty-one articles and stories from scientists, like Stephen Hawking and Freeman Dyson, to SF writers, like David Brin and Nancy Kress. The main common denominator is that it is in Man’s nature that he must explore the universe. There is also some marked criticism of NASA for being too conservative in only wanting a space station in low Earth orbit although I would have thought that as its funding comes from the US government, that this is more a reflection on them than NASA. There is also some pointing out that countries like China and India as well as private enterprise might well enter the space race and see Mars as their destination. If they succeed, then a lot of old SF is going to seem antiquated by backing the wrong countries. Some disappointment was expressed about any of them going to the Moon first, as they considered that done and dusted. From my point of view, I would have thought they would have to at least accomplish again before the much bigger step of going to Mars. They all agree that had Man kept up the desire for space travel in the 60s that we would have already been on the red planet by now. The overall objective is to go far beyond Mars and the scientists concede that there will have to be some scientific breakthrough to enable some practicability in doing this. I suspect that they think with more money and research for any space mission might reveal some information towards that end. They also lightly touch on whether aliens might have the same thought.

Mixing fiction in with fact tends to make a bit of a mouthful with this book and might confuse the regular punter. I have to confess to not being that impressed with Neal Stephenson’s ‘Atmospheria Incognita’, mostly because I was left uncertain as to, without giving away too much spoiler information, just who was actually killed, with the development of a tower from the Earth to low orbit, which made a mess of an otherwise character driven story. This might likely make you cautious about other stories in this book but please read on because the excellent Nancy Kress saves the day with ‘Knotweed & Gardenias’ where a starship leaving the solar system and a rotating crew from cold sleep starts becoming depressed and suicidal. It is up to those awake to determine what is going on before there are too many deaths. Without wanting to give too many secrets away, what makes this story excellent is because it addresses a problem that will have to be solved on our first manned sortie into the blue beyond and something we take for granted on Earth. The fact that Kress recognises this and creates a solution makes is a worthy addition to this book.

Gregory Benford’s ‘The Man Who Sold The Stars’ is about Harold Mann, an entrepreneur whom we follow throughout his life as he develops commercial space travel, staying ahead of paying taxes and ultimately going to the stars himself. The approach seems viable and one can only hope that longevity develops as given here.

‘Living Large’ by Richard A. Lovett is a fun piece where a soon to be hybo – the nickname used for fattening those people who are to hibernate on a space flight – has him talking to the press as he consumes food to bring up his body weight so it can feed him while asleep. At the same time, he discusses why he’s going, his family and other sundry that brings this reality to life. Lovett raises a rather fascinating question about the farting each person produces that should make any designer ponder on how they can use all that gas.

‘Star Call’ by Stephen Baxter follows the conversations spread over decades between a boy turned man on Earth conversing with an Artificial Intelligence in transit to Alpha Centauri. Through the messages, you see him develop and the changing Earth he lives on, combined with the fall and rise of space travel again. I think the ending could have closed better but the rest of it will make you think.

There are a lot of useful factual articles in this book that should help the budding SF author and bring the rest of you interested in space travel and what is needed to go really fast up to speed (sic). Geoffry A. Landis’ article, ‘The Nuclear Rocket: Workhorse Of The Solar System’ explains his topic well, including how to collect matter in space to feed such hungry engines. I did wonder why none of them have considered thorium as the radioactive base although uranium is never mentioned by name neither. What is significant is that NASA actually did develop nuclear engines back in the 60s but when Richard Nixon cancelled trips to Mars, that project got mothballed.

‘Starship Pioneers’ by Adam Crowl touches on a bit of Science Fiction in his article by explaining the use of solar sails and even projecting light from the Earth at such objects to give them propulsion. Although I can see their effectiveness in close proximity to a star, I’m not sure if they’d have the necessary energy to go much further. Also the size of the sail itself must surely open it up for damage from interstellar matter. Seeing the details of a nuclear engine that propels by detonating behind the spaceship had always tended to worry me. You’re going to have this trail of nuclear matter behind you and scare the heebeegeebees out of any alien species who spots it. Oh, if you want an examination of fusion Bussard ramjets, then look no further than here because it gives an explanation that most of you should be able to follow.

The examination in ‘Starship Destination’ by Stephen Baxter and Ian Crawford of just where to go is useful for many things, not least the diagrams pointing out the nearest stars and their relative distances from Earth. Even the closest fifty-six stars are still a long way to travel but you do get some expectation that some might at least be inhabitable.

John Cramer’s ‘Exotic Technology For Interstellar Travel’ looks at all the tropes that we use in Science Fiction and how possible they are. This supplies a lot of the technical info and the criteria that needs to be covered if you want to be border-line realistic. Cramer also explains speed of light and time dilation, again confirming the different passages of time that I could have done with last month. If you have this book then you’ll have all the info you need. He also presses home the point of incompatibility between us and alien life. Although I doubt if we could eat the same foodstuffs, part of me still thinks a lot of this is up in the air until we actually meets some aliens and foodstuffs and see what makes up their protein but he makes a valid case.

Although I’m not entirely sure that a book such as this should mix fact with fiction under one cover, it’s a wide enough spread to give something for everyone. For novice SF writers, you’ll be brought up to date on where scientists are seeing the future of space travel and how to do it which makes this book a cert to add to your collection. 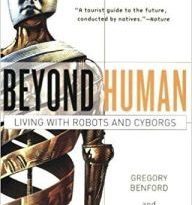 Beyond Human: Living With Robots And Cyborgs by Gregory Benford and Elisabeth Malartre (book review).

Beyond Human: Living With Robots And Cyborgs by Gregory Benford and Elisabeth Malartre (book review).