‘Slow River’ by Nicola Griffith is a standalone near future Science Fiction novel that was originally published in 1995 and is now included in Gollancz’s SF Masterworks series. 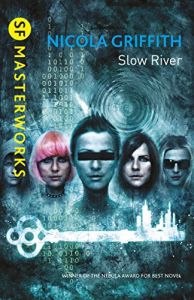 Lore, an heiress and expert in bioremediation, is the victim of a bungled kidnapping. She has tumbled out of the back of a van naked with a gash in her back on the cold cobbles. Worse, the kidnappers have removed her PIDA, the chip that would identify her beyond a doubt. She has become a nobody, worse, someone who is off the societal grid.

A passer-by takes pity on her. Spanner takes her in, arranges medical help to heal her wound and gives her a false identity. But there is a price to pay. Lore has to repay Spanner and thus begins her downward spiral into the world of sleaze and corruption.

Before Lore can find her path to redemption, she has to work out the truth of and face up to her own horrific past, a past no young girl should have to deal with, let alone an heiress.

This novel deals with adult themes and the impact they have on Lore as she winds her way through the various layers of society. It is like dealing with a jungle of corruption. A jungle Lore herself likens to: ‘the jungle isn’t just one place, you know – it’s a dozen, all in layers. And the animals and insects of each layer are utterly oblivious to what’s above them, or below. They don’t even know anything outside their world exists.’

The strength of this novel is showing us a society and its undercurrents as a whole in the near future. This necessitates the slow pace of the novel, so the reader can have a chance to really understand how life is.

A lot of the science in ‘Slow River’ is extrapolation of where the science was heading even in 1995. So this could easily be considered as an action thriller novel. However, some of Lore’s reactions are not what is expected of a normal human. Early on in the novel, we find out Lore’s grandmother had her genes altered so she and all her descendants would have grey hair and eyes, and have protective anti-cancer genes. There is no statement of anything else being deliberately manipulated in genes. Yet Lore learns all the technical aspects of bioremediation while very young and, at the age of seventeen, is given responsibility for a project to clean up the water table of Kirghizia and route the clean water back to the severely diminished Aral Sea. Unintended consequences of gene manipulation? It would seem so.

Overall, ‘Slow River’ is a heart-wrenching story painted against a rich tapestry of a varied future society. It deserved its Nebula for Best Novel in 1997.