If you do the page flick test with ‘Rayguns & Rocketships’, you could be mistaken to think its all about paperback covers. However, right at the beginning of the book, writer Rian Hughes explores his SF roots and if you were also brought up in the UK, then you’re bound to hit on the same kinds of things that you would have found in the 60s-70s so he’s definitely one of us. 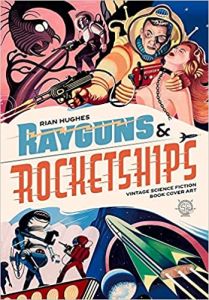 Rian Hughes also mentions, albeit briefly, his own artistic career but the way he hunts down old SF pulps gives his geek credential. I have to confess that I’ve never come across the Badger imprint from the 1950s but I don’t think it was widespread over the UK. His finds in London tends to support that and if you’re into old books, will remark he was a lucky devil finding them. I do wonder if he ever visited the Cambridge Circus bookshops back in the 1980s. I certainly visited one of them there because I still have a memory of old newspaper print smell and felt simply wonderful on it.

Hughes’ text certainly puts the book covers he shows into context and looks like they are from his collection. Occasionally, American covers are reconfigured for British stories and both are compared. Don’t expect them all to be full page. Generally there are a dozen to a page. There is a break to look at Ron Turner’s work. I also note that American authors only started popping up on page 115. The UK was home of SF pulp fiction with a few authors working under many pseudonyms. Hughes’ text pointing out how some worked under slave conditions will make you glad you weren’t working back then. The proof that a good cover sells a book is upheld though.

There’s some interesting sources for some of these covers, including Lion Annuals and even ‘Practical Mechanics’ and a few I haven’t head of like ‘Authentic Science Fiction Monthly’ (was there a ‘Unauthentic Science Fiction’ magazine?). Oh for those who don’t know and who get this book, ‘Tit-Bits’ was a successful British weekly magazine from 1881-1984, frequently found in barbers when I was young but I didn’t know they did a ‘Tit-Bits Science-Fiction Library’.

I did wonder how far into the book I would get before recognising books I actually bought and you have to bear in mind the number of different covers the same titles had. That happened with the Pan Books and ‘A Fall Of Moondust’ and ‘Childhood’s End’, both by Arthur C. Clarke. Oddly, an earlier cover of ‘Childhood’s End’ was actually better.

Philip James Harbottle gives the afterword pointing out how a small select number of writers worked under multiple names did Science Fiction before the problems of the violence in detective stories caused a massive implosion.

Looking at the art here is a joy and one can only hope that there is enough material for another book. Certainly we need another one showing the American equivalents. There were a number of artists that probably never got the credits, in the literal sense, for doing these covers. This book is the kind that you will pick off the shelf from time to time to have  a browse. 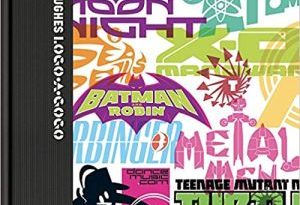