It took a while to find a copy of ‘Power Girl: Power Trip’ at a decent low price. Starting this graphic novel, it became obvious that this is the start of one of her DC Universe realities, although on Earth-1 than Earth-2 where she originally started. She is also confused, first thinking she’s Superman’s cousin and then after various medicals by Dr. Mid-Nite, confusion as to just what she is.

It gets even more confusing when the Legion Of Super-Heroes arrive and say she’s really one of their team, Andromeda. I doubt if she’s sure at the end of the book but seems to have a prosperous company and friends and is coping with the world and not worrying about her origins. 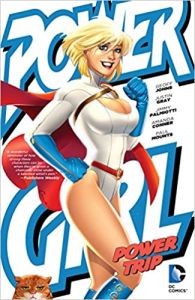 A large part of the opening volume is devoted to the Ultra-Humanite, a giant white gorilla with a human brain, and his plan to steal Power Girl’s body, blackmailing her by elevating New York into the sky. You do have to wonder why Metropolis isn’t the target but then, as the Justice Society Of America is here, I’m still wondering did DC Comics resurrect Earth-2 or if they’ve kept the merged worlds, just where has Metropolis gone? Oh, there’s also an origin given for the Ultra-Humanite where, although you feel sorry for his original body condition, his solution, however, is that of a crazy person.

One character I thought I would never see again is Vortox, similarly powered to Kryptonians but from a camp disco age apparel. Oh, he also speaks of himself in third person. With his people sterilised by a rival species, he comes to Earth looking for Power Girl as his bride with outright giggles along the way. The twists at the end will make you wonder why no one has thought to put Power Girl on the screen as she’s such a sharp contrast to that Kryptonian chap.

It’s not helped when a teen-age blackmailer gets a couple photographs of her while she’s changing costume, showing her maybe naked and her other identity. Much of time she hasn’t had to worry about wearing a mask as she points out at the beginning, most people look at her bust than her face.

The balance of humour and violence is something comparable to how Amanda Conner and Jimmy Palmiotti went onto do it with Harley Quinn but this is slightly saner but employs the same tactic with the supporting cast.

The stories are taken from JSA Classified: 1-4, Power Girl # 1-12 and Wonder Woman # 600, making this a bigger graphic novel than usual. There’s also a selection of alternative covers at the back of the book I’m also surprised why DC Comics hasn’t re-released it considering how high the price for it has accelerated. You would think someone in their accounts department would see dollar signs and do something about it.

If you can lay your hands on a copy then it’s worth a look and chuckle.