In my older book selection about Science Fiction, I have two favoured editors/writers. Reginald Bretnor is essentially if you want interviews with Golden Age authors. Thomas D. Clareson for gathering writers about Science Fiction theory and contributing himself. I came across this book a few months back, ‘Many Futures, Many Worlds’, and realised I hadn’t read it. Over the 14 articles, including Stanley Schmidt and Samuel Delaney, there is a discussion on SF topics.

A lot of modern SF is being described as becoming too samey, although when you see so many book series, the move to space opera would be more appropriate. Getting new ideas or at least new takes on ideas would help but some more sparkle into our genre and going back as far as 1977 does illustrate that is an old problem and we’re seeing the problem today. 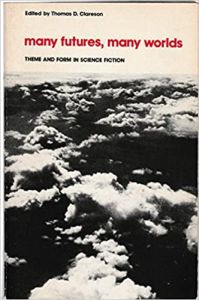 Science Fiction is a genre of problem solving. It doesn’t necessarily have to be correct but shows what happens when particular paths are taken. With all the camera surveillance going on, the shadow of George Orwell’s ‘1984’ still looms on the horizon. Stanley Schmidt’s comment that John Campbell was an editor who disliked sloppy science and lazy thinking isn’t far off the mark and the difference between Science Fiction and poorly written Sci-Fi. The Internet has opened up our sources for information but, equally, also that of misinformation. As writers, we need to know the difference and get it right.

S.C. Fredericks’ looks at Samuel Delany’s ‘The Einstein Intersection’ in depth and its metaphors. I knew, when I read it, they existed because Delaney discussed them in his introduction in the novel. However, in my youth, I wasn’t that conversant with his sources and it didn’t really make that much of a difference to me reading the story set in a dystopic future. All it does tend to suggest to me is certain character themes repeat themselves in different times and if adhered explicitly to is also a form of lazy thinking because the plot is already worked out for you. Mind you, very few authors have taken a similar route, mostly because it does look like plot recycling.

One of Clareson’s own articles makes a telling point about H. Ryder Haggard’s ‘She’ novel and had over a thousand books copying his story. Is that telling us something about the publishers or writers at the time or the readers who bought them at the time? I mean, if you only need one original story, doesn’t it curb others doing them to one a generation. Again, that hasn’t really changed over the years other than spotting the original. We need adventurous (sic) publishers.

Beverley Friend points out that Isaac Asimov saw SF being divided into three types: gadget, adventure and social. I thought that as pretty wide divisions that covers most things and the last two apply to most genres. I do like the fact that she addresses sexism without actually calling it that. I did look up when ‘sexism’ was first used, 1968, so it was still quite new at the time she wrote her article. Female characters were seen as secondary at the time. I think we can honestly say that has changed drastically since this book came out, equally to the number of female writers out there as well.

Patricia Warrick’s chapter ‘The Man-Machine Intelligence Relationship’ is a demonstration of getting the balance of book synopsis and comment right that current writers could learn from and if you get this book, keep your notepad ready for adding to your books that you would want to read. I should also point out that all the notes tend to be mostly towards the source of their material then further comment.

Finally, the article by Samuel Delaney himself, still very much in university mode by his choice of books although he does think SF should be treated as it is rather than match to other genres.

You can tell by how I react which areas I learnt most from. Not the best Clareson book but certainly should warm you up to look up his other books. 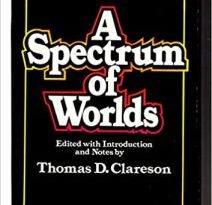 A Spectrum Of Worlds edited with notes by Thomas D. Clareson (book review). 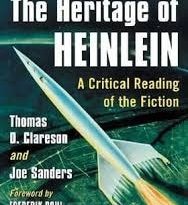 The Heritage Of Heinlein: A Critical Reading Of The Fiction by Thomas D. Clareson and Joe Sanders (book review).

2 thoughts on “Many Futures, Many Worlds edited by Thomas D. Clareson (book review).”

The Heritage Of Heinlein: A Critical Reading Of The Fiction by Thomas D. Clareson and Joe Sanders (book review).

A Spectrum Of Worlds edited with notes by Thomas D. Clareson (book review).