For those who don’t know, the 1927 film ‘London After Midnight’ directed by Todd Browning isn’t available for viewing. The last copy in the MGM vault was lost in a fire in 1965, although you can google up photos from it, significant because they feature master of disguise, Lon Chaney. 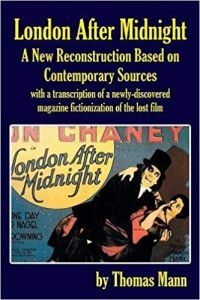 Thomas Mann, in his introduction to this book, ‘London After Midnight’, points out that its only people like us who have a passion for magazines that have collected information about obscure. ‘London After Midnight’ is also one of the earliest films to have had two novelisations made of it, one in the UK’s ‘Boy’s Cinema’ magazine, where we had the film under its original name ‘The Hypnotist’ which he has a copy. This is significant as ‘The Hypnotist’ had access either the script or screening as all the missing scenes are included that wasn’t in ‘London After Midnight’. Mann doesn’t know who wrote the novelisation but I would hazard a guess at the magazine’s editor as was often to happen with our publications keeping it in-house. So we have Mann discussing the US novelisation was by Marie Coolidge-Rask, covered in 2011 in another BearMedia book by Philip J. Riley, and making comparisons between the two.

What followed is the 20 page UK story which if you’re interested in historical films is required reading. It’s tempted to give a precise here but you need to read it for yourself. From what Mann writes, you get to know which actor is which in the film. Lon Chaney plays two parts and I’m not sure, even back in 1927, if a police detective can use hypnosis to solve a 5 year-old apparent suicide, hence the UK title. However, it is typical of Victorian melodrama where everyone is honest and helpful, except for the murderer.

The only flaw is having to search for the notes on the first chapter and found them on page 64-69 rather than at the end of the book.

In many respects, this is a fast read but is worthwhile if you want to know more about a lost Lon Chaney film.