The TV series Logan’s Run that Stam Fine dug up was based on the film, which was itself based on the novel. Yikes, that is complicated.

It aired for 14 episodes beginning in late 1977, but his recollections of it are hazy at best, so Stam thought he’d give it another go. An ex-Sandman named Logan (Gregory Harrison) and Jessica (Heather Menzies) manage to flee the City of Domes while being pursued by Francis, an old friend of Logan’s. The only difference is that now Logan and Jessica have a vehicle and a robot friend.

Was Logan’s Run cancelled too soon because of low numbers, or was it simply a bad show trying to cash in on Star Wars‘ success? The solution may be found in this scifi retrospective.

Unless, of course, everything in this video is a big fib. 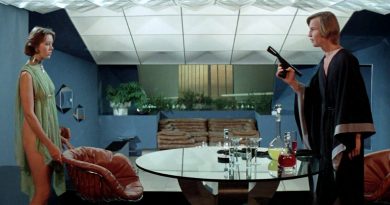