In this nasty movie from 1959, ‘Horrors Of The Black Museum’, viewers were introduced to macabre events with a young lady receiving a pair of binoculars as an anonymous gift. Many will remember the scene where she puts the binoculars to her eyes only to receive metal spikes, several inches long, straight into her head all in glorious Technicolor. This is only one of a series of grisly murders that have been taking place in the community and the police are baffled. Along comes ace crime reporter, shuffling along with his stick, Edward Bancroft (Michael Gough), who seems to be much better than the bumbling police. Despite thinking he may be the chap to solve the murders, you probably begin to get a bit suspicious when seeing that he has black museum, a much darker museum than anything found at the police station. He also has a rather dubious assistant, a subservient young man with a funny look about him.

Bancroft has a young girlfriend, a blonde bimbo who likes a good time but an ugly scene arises when, after asking for money and receiving none, she ditches him and heads for town looking for a new man. You seem to know that she is going to come to her sticky end. Sure enough, later that evening, when going to bed, her head is cut off with a guillotine blade.

Bancroft has the habit of going into an antique shop to buy items that might be used in murders. The woman running the shop recognises that her goods have featured in some of the recent killings and putting two and two together she confronts the reporter with blackmail in mind. He has a large pair of pincers in hand at the time. Her neck is close at hand and you know what’s happening next.

By this time you get the picture that Bancroft and possibly his assistant are not good citizens. He has some sort of crazy notion about murder, relishing in its delivery with the thought that he could not be captured, especially because he was so much more intelligent than the police or so he thought!

So the movie progresses, with more and more grisly murders. The style of the movie is quite banal, with no character you could really identify with. It’s a pastiche of the times, a sort of beatnik era gone mad with blackness oozing out of the seams. It is a time just after the war and before the swinging 60s arrived. When it was released, the movie was X-rated and now it’s rated 15 because you don’t really see much of the murder action which is left to the imagination of the watcher. You see the before and after but not the actual deed, which was commensurate with the times, so compared to modern day action it is rather tame by comparison. However, it has a certain cold atmosphere about it which in many respects is far more chilling than modern examples.

Yes, Bancroft is a real nasty piece of work, as is the movie itself made apparently as part of a trilogy along with ‘Peeping Tom’ and ‘Circus Of Horrors’, which I imagine will be released sometime soon. The subject is also particularly nasty because it involves sadistic murder of women in a cold way as perpetrated by psychopaths. Bancroft is definitely psychopathic. What happens to him? You will need to watch to find out but you hope it will be a sticky end and that’s the curious aspect about this. In wishing for revenge against the murderer, a particularly nasty murderer, you wish a similar fate so making yourself almost as bad as Bancroft.

There are the usual extras but nothing magnificent. A little bit about the colour rendition, hypnovista as it is called, theatrical trailers and images.

Can’t say it was really enjoyable to watch. The colour rendition was a magnificent example of the period, garish and over the top, just like the movie. The transfer to DVD was really good. So, if you’re up to a bit of excessive psychopathic killing then this is for you. 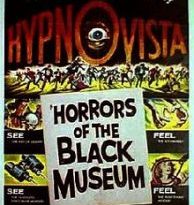