In case anyone thinks I’m losing track, ‘Harley Quinn Vol. 6: Black, White And Red All Over’ reprints Harley Quinn # 26-30 from 2016. Now here’s an oddity, there’s only one real side-plot and it looks like it’ll finish in the next volume. I don’t think that was intentional, only by the limit of issues per volume. The first half of the book covers Harley meeting the Red Tool, who really looks like DC Comics version of Deadpool.

He also knows a lot about her history and a quick resume of her background that isn’t in public domain, much to Harley’s distain. Suddenly, there seems to be a change of policy to one-off stories although centred on the Penguin’s desire to own the Coney Island property and that includes Harley’s boarding hotel. In some respects, the resolution is too quick and a reliance that the Penguin won’t discover he’d been hoodwinked later. 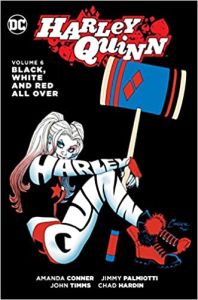 This is also a turning point for Harley’s appearance where her hair gets a colour make-over and looks less gaudy. In many respects, Harley Quinn has had many make-overs over the years and apart from a predominance for red and blue or black and red, favouring some elements of an obvious harlequin, seems to have weathered the changes. That is probably the result of her strong badass personality.

Looking at the cover of the seventh volume, with the caption ‘Rebirth’, it looks like this might actually be the end of one DC Universe reality. At least not too much is left hanging by fingernails off a ledge. 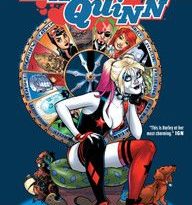 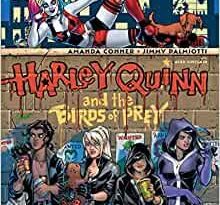 Harley Quinn And The Birds Of Prey: The Hunt For Harley by Amanda Conner and Jimmy Palmiotti (graphic novel review). 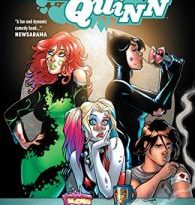