Filmmaker Paul Feig’s ‘Ghostbusters’ reboot pretty much followed the characteristic aspects of his previous films (‘Bridesmaids’, ‘The Heat’, ‘Spy’) all incorporating a self-awareness of female-oriented friendship and the estrogen-driven escapades rooted in inspired goofiness. So given this familiar foundation of Feig’s big screen blueprint one would expect that his creative input into the continued ‘Ghostbusters’ franchise for the millennium moviegoers would result in the heralded hype his film project is now enjoying at large. Sure, the feminine-charged ‘Ghostbusters’ seemed like a radical concept and would obviously trigger the nostalgic sentiments and comparisons of the classic 80s comedy spearheaded by beloved on-screen paranormal hucksters Bill Murray, Dan Aykroyd, Harold Ramis and Ernie Hudson. Nevertheless, singer Ray Parker Jr.’s lyrical catchphrase ‘Who you gonna call?’ within the ‘Ghostbusters’ theme song needs to be addressed accordingly. The answer: the handlers behind the original ‘Ghostbusters’ film that could uplift the disjointed high jinks and synthetic silliness of Feig’s current comedic ghostly she-power schlockfest. It is only natural that ‘Ghostbusters’ had high expectations for Sony Pictures to perform well, given the aggressive marketing tactics, early release of the ‘Ghostbusters’ movie trailer (which was heavily panned online) and the aforementioned cinematic legacy of the original film’s fanatical following and reputation. However, this third installation of ‘Ghostbusters’ feels curiously flat and strained in its stillborn witticism. The creep factor borders on campy and cheesy, although this effectively worked for Ivan Reitman’s 32-year old spook-ridden farce in the eighties, for which in today’s cinematic circle is inexcusable due to the edgier and challenging special effects that could have played up the whimsy and wonderment of this breezy, bubble-gum coloured romp with seemingly low-grade spark and sizzle.

Feig’s interpretation of the ‘Ghostbusters’ universe could have been fresh and favorable especially with the colorful casting of his capable four female principals in the Emmy-winning and Oscar-nominated Melissa McCarthy along with ‘Saturday Night Live’ personalities Kristen Wiig, Kate McKinnon and Leslie Jones. Unfortunately for these noted funny ladies, they were saddled (or slimmed if you will) by a transparent script almost as invisible as the pesky ghosts they are trying to pacify. The recycled by-the-numbers hilarity and hysteria does not make this brand of ghost-busting quite distinguishing. Chemistry-wise, the Ghostbuster gals seem to revel in the collective merry-minded mischievousness and genuinely try to bring energy and outrageous antics to this flaccid frightfest. Still, the mixture of ‘Ghostbusters’ gooey gumption with a dash of egghead feisty femininity never seems to translate into anything beyond the tired gimmick of promoting another excuse to tap into yesteryear’s profitable fun and frolic that made the wise-cracking Murray and his klutzy cohorts so amusing and welcomed in their rollicking ghostly gem from the Reagan-era.

Quite frankly, the notion that ‘Ghostbusters’ is unfairly being knocked for its misogynistic overtones fueled by bias Internet-based fanboys not accepting that nerdy womanly scientists cannot fill the shoes of their revered male counterparts from the previous two predecessors is somewhat misleading. Sure, the decision to cast an all-female Ghostbusters team turned some curious heads but, for the most part, many thought this to be rather intriguing and experimental. The actual disdain can be pinpointed to the fact that Feig’s flimsy boo-spewing fable is grounded in clichéd and forced chuckles, weak-kneed jokes and gags, lazy writing and uninspired visual neon lighting techniques that look like a cheapened explosion from a vintage late 70s New York discotheque.

Unfortunately, ‘Ghostbusters’ wallows in mediocrity and fails to capture the acquired giddiness and imagination so pronounced in the prior entertaining installments. Even if the original actors in Murray, Aykroyd, the late Ramis and Hudson had decided to reprise their roles under Feig’s problematic production, the results would be the same, an aimless reboot without any definitive bite or backbone for a cobbled comedy that is slight and stretched thin to its toothless core. Amazingly, ‘Ghostbusters’ cannot decide if it should remain faithful to its humble roots (it does help trivially that iconic ‘Ghostbuster’ notables make scattered cameos, sans Rick Moranis, including that glorified scene-stealer in the Stay Puft Marshmallow Man as well as hot dog gulper Slimer) or venture off into something resembling its own goofy identity and distinction. Either way, the third time around simply meanders in over-produced, noisy emptiness.

The so-called plot in ‘Ghostbusters’ focuses on college professor Erin Gilbert (Wiig presumably in the Murray/Dr. Peter Venkman role) and her fascination with ghost activities that end up costing her an academic career in the process. Specifically, Erin’s controversial book that she wrote along with co-author Abby Yates (McCarthy) served as the basis for her firing. Abby’s obsession with ghosts still has her invested with this spirit phenomenon that she researches defiantly with her kooky associate Jillian Holtzman (McKinnon) in tow. Eventually, it would take the trio’s status of joblessness (not to mention a run-in with a slim-spewing ghost that loves soaking humans with its sticky green goo) to collaborate on going into business as paranormal exterminators out to showcase their expertise in ‘busting ghosts’.

In the meanwhile, there is something brewing in the twisted mind of supernatural-loving freak Rowan North (Neil Casey). After all, he is the lost soul responsible for unleashing the onslaught of riff-raffish apparitions upon New York City courtesy of his miserable, lonely existence. Now it is up to Erin, Abby and Jillian to eliminate Rowan’s sinister agenda and eradicate the spooky pests that he has manipulated to cause the city-wide panic. As Internet sensational darlings, the Ghostbusters are committed to step up to the plate as the sassy saviors they were meant to be since going into the ghost-busting industry.

The later arrival of street-wise transit worker Patty Tolan (Jones) completes the Ghostbusters’ quartet. Patty, whose run in with one of the slimy ghosts in the subway tunnel was pivotal to joining the three scientists, has something to offer the ghost-chasing brainiacs: a.) her knowledge of the city’s whereabouts and b.) her funeral director uncle’s hearse that serves as the official transportation for the Ghostbusters.

Overall, the third outing regarding this toothless entry ‘Ghostbusters’ notoriously lacks the robust impishness and rapport of the male character counterparts that were devilishly drawn together and cemented by Murray’s droll humor. Here, the ladies come off as bland and indifferent, at least for the Paul McCartney and John Lennon of the team in Wiig’s Erin Gilbert and McCarthy’s Abby Yates. McKinnon’s Jillian Holtzman is the only truly spry Ghostbuster who is credible as an off-kilter genius ditz with off-the-wall likability. Some may gravitate towards Jones’s stereotypical brassy black chick with the brash quips and animated overreactions. Although Jones brings in the high-wire urbanized smirks in contrast to her quieter, geekier counterparts, it is cringeworthy watching her play an over-the-top, towering, mouthy cultural exaggeration that is woefully embarrassing for the sake of this dismissive, hedonistic hoot.

Ironically, it is the hunky Chris Hemsworth that fares decently as the handsome himbo Kevin, the dim-witted Ghostbusters male assistant that serves as the doltish eye candy for the cerebral lasses, particularly for the smitten Erin. Another SNL alum, Cecily Strong, checks in as the menacing mouthpiece from the Mayor’s office that tries to discredit the popular ghost-busting technicians as ‘sad, thrill-seeking women’.

Feig, serving as both the film’s director and co-screenwriter (along with ‘The Heat’ scriber Katie Dippold) has no cohesive vision for the listless ‘Ghostbusters’ and could have used some critical pointers in studying the proven anatomy of what made Reitman’s nostalgic vehicle so engaging that still thrives after three decades since coming into the movie audience’s consciousness. From the lame and limping laughs dipped in cartoonish crudeness (ie a male ghost gets a rousing jolt to his ‘junk’ courtesy of his heroic ghost-busting detractors) to musical acts Fall Out Boy’s/Missy Elliott’s relentlessly unrecognisable, erratic and choppy remake of the aforementioned Parker’s infectious ‘Ghostbusters’ theme song in this regurgitated comedy that has no excuse for catering to a lackluster rebirth while die-hard and casual fans patiently waited for a festive follow-up from Murray and crew for thirty-plus years.

To randomly quote a classic ‘Ghostbusters’ lyrical line: ‘I ain’t ‘fraid of no ghosts’. This may be the case but one should be very afraid of this heavy-handed banal boofest for wasting their time, anticipation and consideration.

Directed and Co-Written by: Paul Feig 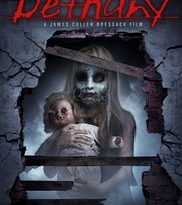