Oh dear, oh dear, oh dear! That’s not the best way to start a review of a soundtrack but it sums up my opinion rather nicely. The reason for this is the ‘Ghost Stories: Original Motion Picture Soundtrack’ by Frank Ilfman. The film was released in the UK back in April 2018 and the soundtrack was made available on CD at the same time. I haven’t seen the film which possibly puts me at a disadvantage, but I don’t think so.

What we have on this CD are 40 tracks lasting 61 minutes. Not all the tracks are musical however as 10 of the tracks are actual dialog lifted directly from the film. This amounts to 2 minutes and 10 seconds of people speaking or to put it another way, the musical score is 58 minutes and 50 seconds split over 30 tracks. 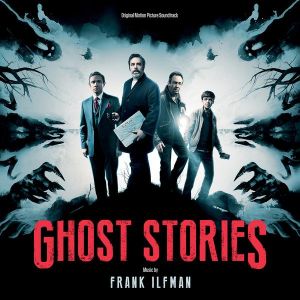 Let’s get the positives out of the way. The longest track is the last one, track 40 ‘Goodman’s Theme’ by Frank Ilfman at 4 minutes and 28 seconds. This is the one that plays for the end credits as you exit the cinema trying not to stand in the spilled popcorn and making sure you have your belongings. It’s actually a nice track and shows what Frank Ilfman is capable of. It’s nicely orchestrated with a traditional sounding orchestra with the strings being the dominant factor.

The next longest Ilfman track is 23, ‘Priddle’s Theme’ at 3 minutes and 9 seconds but this is not the second longest track. That honour goes to the classic ‘Monster Mash’ by Bobby “Boris” Pickett & The Crypt Kickers at 3 minutes 14 seconds. Being track 39, this precedes the final credits but it’s always good to go out on a high point.

One of the problems I have with this CD, apart from the dialog, is that many of the tracks are just snippets. Only 2 of Ilfman’s tracks are longer than 3 minutes. At the other end of the scale, there are four of Ilfman tracks under 1 minute with the 2 shortest being just 11 seconds long.

In addition to these snippets of diaolog, Ilfman instrumental’s there are two vocal tracks. I have already mentioned the ‘Monster Mash’ but track 10, ‘Why’ by Anthony Newley, is the other one. It’s not my favourite track of the CD I must admit. You are most likely to hear it on a Sunday morning ‘Love Songs’ radio show.

Of the Ilfman tracks, things start off nicely with Track 2, ‘The Allerton Suite’. It’s a nice orchestral piece with the strings slowly building up to a sudden stop. The majority of Ilman’s tracks have strings as the dominant instrument although some of the shorter pieces do use synthesisers for weird effects.

There are a few tracks (9, 11, 12, 17, 18…) which have loud and somewhat unexpected noises. This will either scare the bejesus out of you or make you jump. It’s obviously written to emphasise something on screen but I don’t have the screen content playing in front of me as I’m trying to listen to a soundtrack.

The tracks I thought were very well done are 2, ‘The Allerton Suite’, 7, ‘The Chase’, 28, ‘Maria’s Theme’ and, of course, 40 ‘Goodman’s Theme’ for the end credits. ‘Maria’s Theme’ has a woodwind instrument to get things going and a brief appearance of a choir.

I’m not going to write much more as I didn’t particularly enjoy listening to this soundtrack. While its compilation is an interesting experiment, I found that the end result to be disjointed. Many of the tracks are just too short to leave any lasting impression. I also found it annoying that the last few seconds (up to 5 on some tracks) are silent on quite a few tracks. This might not sound like much but it’s a big slice of a track that is only 1 minute 12 seconds long. The two tracks with vocals also seem out of place with Ilfman’s score. Of course, other people may have a different listening experience but it’s not one for me I’m afraid.

1 We Have To Be So Very Careful (Dialogue) by Phillip Goodman 0:05

2 The Allerton Suite by Frank Ilfman 2:11

4 A Voice From Beyond (Dialogue) by Charles Cameron 0:18

8 That Place Has A History (Dialogue) by Tony Matthews 0:21

15 Tell Me Everything (Dialogue) by Phillip Goodman & Simon Rifkind 0:20