In horror films, a common trope is to have a group of youngsters in a situation where they will be slaughtered one at a time by a maniac or a supernatural being, usually bloodily. The last scene is often of the last of the group fleeing the site of the carnage with the ambiguousness of whether they will make it or not. Frequently, the potential survivor is female. The same format is used in horror novels. 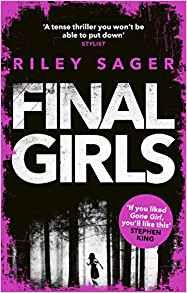 This novel starts with the premise that sometimes the girl has survived. The press has dubbed these the ‘Final Girls’. Quincy Carpenter is one of them. She survived the slaughter of her friends when an escaped mental patient attacked them at a cabin in the woods. In the nine years since she has put her life back together by running a blog on cake-making and developing a relationship with Jeff, her lawyer boyfriend. She has kept in touch with Coop, the policeman who rescued her and killed her attacker. Quincy knows of two other Final Girls: Lisa who was attacked in a sorority house and Samantha who survived a motel massacre. The attacks were many years apart and by different perpetrators but the press still makes connections. Then Quincy gets news that Lisa is dead and the press dig up the old stories.

At first, it is thought that Lisa killed herself but it soon transpires that she was murdered. Then, Samantha turns up. She and Quincy have never met as Samantha dropped out of sight years ago. Although Quincy thinks it a little strange that she should choose this moment to reappear, she is drawn to the other woman by their shared experiences. Samantha, though, seems intent in luring Quincy out of the comfortable niche she has made herself, daring her to do things she would never normally do, like shop-lifting and acting as a vigilante. As she finds herself drawn deeper into these activities, Quincy begins to wonder if Samantha has something to do with Lisa’s death.

There is another side to the situation. Of the three women, Quincy is the only one who cannot remember details of the attack. The time between her friend running out of the woods bleeding and screaming and the time she ran into Coop’s arms is a blank. Samantha says she is trying to make her remember and to do that she has to make her angry.

Interspersed between the chapters that follow the aftermath of Lisa’s death are Quincy’s memories of what happened that long-ago weekend.

Action and reaction between Quincy and Samantha are excellently portrayed, as is that of Coop, the friend who is there when needed but otherwise keeps his distance. There is tension and misdirection as Quincy puts together the clues surrounding Lisa’s death and Samantha’s sudden appearance. This may be a debut novel but Sager knows how to build tension and to spice it with the unexpected. The weakness is Jeff’s character. He is a make-weight, only there to show that Quincy has put the past behind her and is living a normal life. Otherwise, an excellent thriller.