This is a second printing and updated version of ‘Filmed In Supermarionation’ by Stephen La Rivière, originally printed in 2009 in 2014 and based off his film documentary and I reviewed a few years back. I’ve been sitting on this book for a while and decided I can fit in in now.

Here you have the entire history of the various companies Gerry Anderson belonged to as they slowly shook down to AP Productions and its various directors trying to hold their heads above water in the 1950s. 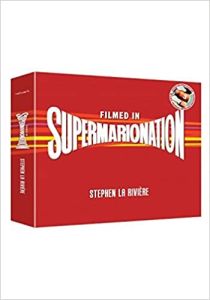 It’s useful to remember that Barry Grey came up with the original idea for ‘Four Feather Falls’. The contribution by Reg Hill tends to be under-estimated but he did design Supercar and its promotional booklet, not to mention the thin aquarium between models and camera for underwater scenes, also designing Fireball XL5 and partially Stingray. It is also the tireless on-going work that made some people move on but it did allow a certain Derek Meddings and Brian Johncock/Johnson into the fold and raise the special effects level that went through the entire industry.

Don’t expect to read this book to give much detail of the series from in front of the screen, this book is all about what happened behind the scenes. Undoubtedly, Lew Grade buying the company but leaving their autonomy gave them the necessary funding to advance.

It’s interesting to see the early ideas for ‘Joe 90’ were around the XL5 era, reminding people that ideas don’t die, just put on hold and reworked. From a modelwork pov, realising that Space City was made of wood and cardboard was a reminder of available material and keeping things like to keep the weight down for the struggling motors.

When it comes to the chapters on ‘Thunderbirds’ that my awareness of the original edition comes to the fore and the rise of Arthur Cripps from janitor to prop maker is ignored for a story about the male puppets gaining gentilia one night.

La Rivière doesn’t hold back with explaining where the rot sets in as the company grows and becomes less friendly. I do wonder with the unions stepping in why there was no questioning how much each of the employees were getting.

Interestingly, although La Rivière points out that Anderson was considering having the hero killed off in the middle of a series for Captain Scarlet misses the fact that was what happened later to Tiger Ninestein in ‘Terrahawks’.

In some respects I wish La Rivière had covered the live-action shows, although he briefly covers a couple points. I mean it wasn’t as though they weren’t using special effects. His assessment of Gerry Anderson feels a lot more revealing this time and certainly his weak points, although it should have been compared to the era. After all, jobs were a lot more compartmentalised, no doubt to union rules sometimes, and upsetting the order of things weren’t done. I could probably make an article of my own on assessments on this subject but you should find most of it here enlightening.