I pulled ‘Fantasy Art: The Best In Fantasy And SF Art Worldwide’ by Dick Jude 5 years back and only now working through my bought books decided it was time to give it a proper read. I’m always amazed when I can get a near-mint copy of a book at such a low price. Bargains are out there if you look around. 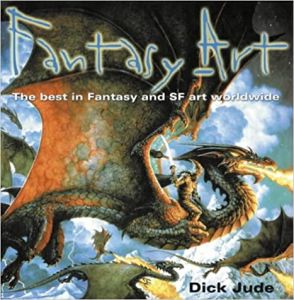 This one has ten artists from 1999 as this is the softcover from the hardback edition. With half of them instantly recognisable. I’m going to have to use past tense when referring to history from two decades back rather than check where they are now. It’s also rather gratifying that there is at least a small postage stamp-sized photo of each artist, all right one was a sketch, showing what they looked like. Granted they should be bigger but it does help to make a better connection to the reader. Mind you, 19 years after this book came out, would they look the same today?

Alan Lee shared a studio with Brian Froud in Exmoor in Devon and they share similar detailing. I might not be a lover of fantasy, with art you have to admire how the work is detailed and a great introduction into this book and he goes from pencil to water colour with a flourish.

Don Maitz is an oil painter and much of his work appeared on role-playing games covers and books. Here, we also see how he constructs his paintings, including some that he changed his mind over when used for covers.

John Howe is more fantasy-orientated using watercolour and pencils and shows his designs building up to a final picture as do many of them in this book.

Brom I’ve seen in later book and here covers more of his trading cards work here. With so many cards to do, I can understand why he did more complete paintings before chopping to the elements needed for the cards.

Of all the artists here, Jim Burns has to be the most generous detailing his art techniques and equipment, although it does indicate another important element in that he’s not afraid to experiment with his equipment until he finds what works best for him. I hadn’t realised that drawing people without a model was his weakness. Even so, if you want a nugget to hunt this book down, then this is it especially the nascent digital software at the time this book came out.

This led into Rick Berry as he found he had to bluff when he told he could paint the cover of ‘Neuromancer’ digitally, talked to computer experts who showed him how and then how to explain to the publisher’s art director why clunky art was down to large pixels at the time.

Chris Moore shows how he developed some of his paintings and is so useful to see how elements of the pictures are changed at the drawing stage. This is the kind of stuff that should be taught at school for no other reason than to learn how to be flexible in design and not expect to get it right at the first attempt. Alas, school lessons don’t tend to look this way in teaching art technique.

I hadn’t come across Steve Stone before. He came from a brief animation background before moving into digital art with some interesting pictures here with some chrome effects. There are some books of his out there so prepared to give him another look which is the whole point of these artist compilations.

Fred Gambino is a name that should be familiar with you all. At this period of time he made model spacecraft before painting them and then the transition into 3D software and then finding his favourite no longer available. When have we all see that happen?

Finally, Dave McKean, known for his with Neil Gaiman but building his career at this time. Probably the more outlandish of the artists here although I do like his flying robot foot.

In many respects this book is more a time capsule of technique now but if you’re a fan of any or all these artists then it is worth seeking out because there’s some great art in here. If you’re a developing artist then getting ideas from the pros is always a good idea. 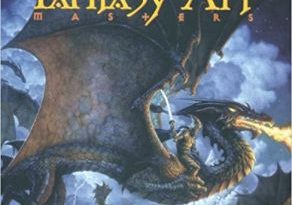