Putting the Science into Science Fiction.

You know how it is. It’s getting late at night, you’re not tired and you spot a half hour show about Science Fiction by a quick channel scan. Actually, it’s about Science Fiction films. As if we would be lucky if SF books would get such a treatment? Then again, maybe having them classed as a separate category isn’t such a bad thing, especially when the highlight was saying that the science in Science Fiction was fake!

On some levels that is correct. After all, we don’t have faster-than-light space travel, time travel, laser weaponry, time travel and a myriad other tropes that populate Science Fiction. Then again, eighty years ago, we didn’t have computers, clones, robots and cyborgs neither and we do now. Who knows what we might have in twenty years. Science Fiction is supposed to be speculative as to where we are likely to be going into the future where such things are possible. It wouldn’t be Science Fiction without them. It isn’t really supposed to be creating science although it might shape technological possibilities. The issues are less about the science but the ethics of its use for good and bad. It prepares us for when the events are possible. None of us see computers as a bad thing to own or use although we might see the problem being the user than the hard or software. Such ethics comes from Science Fiction than any other media debates. If anything, computers has shown that SF writers need to look from the ground up more and see different kinds of pitfalls than just letting computers rule the world. Interestingly, this is also absorbed by people who don’t even read Science Fiction. A social absorption if you like. Science Fiction would be there whether we invented it or not. Well, unless you want your reality to stagnate and not change. Would a utopia have Science Fiction?

Some of the above is already known to you all. My main contention is that not all the science used in Science Fiction is fake. Most of it isn’t. That is, the science laws we all recognise aren’t simply ignored. Indeed, what is often faked the most is the technology that is created from it, simply because we haven’t advanced enough to create it yet. The art of writing Science Fiction is seeing what is possible today and where it might lead if certain actions were taken into the future. It is supposed to speculate and even escalate as to what might happen not predict the future. SF writers are the ones with the figurative crystal ball and fiction is the means to open the discussion in a safe zone that you can close the covers and return to your current reality safety net. Our genre can show both the good and bad of only a probable future.

The basic science actually tends to stay the same as what we have now most of the time. If some laws, like relativity are violated to ensure you can get to a distant planet in weeks instead of centuries then it’s a means to remove the boring bits and not introduce another generation of characters who arrive there. The trick for hard science Science Fiction writers is to explain how it might be done in a convincing way for the reality they have created. The skill is more to do with being self-consistent and plausible than faking it and just to move the story along. The skill of the storywriter is to keep your attention to the page. If it feels wrong, the reader will know, so add conviction to the ability of the storyteller. With SF films, the production team don’t have to go into as much detail and just rely on existing tropes from SF than work out from the ground up. Probably why when they make mistakes like not being able to tell their parsecs from distance it tends to stand out more than when they get it right.

Oddly, just before I started writing this editorial, I was writing the story ‘Space Emergency’ which should also be in this month’s SFC update and sorting out the numbers when it came to how much time would pass on Earth when a starship travelled 16 light years to Tau Ceti. One of the points of the story was showing how such long a short hop like that was in normal time because it would be pertinent to when they arrived. Up to half-way out you would be going as fast as you could up to near light speed. I didn’t want to violate Einstein’s speed of light and then you would coast along in deceleration to conserve fuel rather than try one massive stop at the end. Shiptime, I figured would be about 16 years until I put some thought into it. A gradient acceleration would not get you up to near light speed very quickly so decided to make it a round 20 years. It would take a lot longer than my relative forecast of eight years up to ten years before deceleration. Indeed, soon as you got somewhere near to the speed of light, you would be decelerating again or you would overshoot the destination. Working out the maths, one number I came across was that a gradual acceleration meant that you wouldn’t need to go beyond 1g, actually it was closer to 0.0009 m/2^2 for the purists out there so you wouldn’t need to wear ‘gravity-boots’ as everything would be moving at the same velocity in the same direction. With everything pointing in the same direction, there wouldn’t be any vector forces to throw a wobbly. If anything, I could happily stay below the speed of light and Einstein wouldn’t be spinning in his grave. A few more years would make it more plausible and still seem right.

It became trickier when it came to working out how much time had passed in transit. Adding a few more years would give a rounded and more realistic number. As I divided the distance of 20 light years into two, that made things relativity (sic) easy. Adding the return trip, 40 years and however long it would take to sort the problem out and a crucial problem of how many normal time had passed and the dilemma of would any of the crew really want to do the round trip. Probably not, so there was a needed alternative option that many would choose. If they were brought up to that way of life, they wouldn’t see it out of the ordinary which meant I didn’t have to compare to 21st century mentalities.

Now as we all know, time as you approach the speed of light moves at a different rate for those who aren’t travelling and from that perspective there is a real need to know how much lapsed time would have taken place for those not travelling at those velocities. Figuring that I can’t have been the first person needing to know such information, I thought I’d scout around on the Net. A selection of sites revealed smartass answers when people were being too literal to an honest question and could fathom the notion of ‘lapsed time’, only seeing the light years aspect of the travellers. Mind you, I did find a lot of integrated calculus calculations than a simple answer. I doubt if anyone was going to sit down and check. Well, not with a short story but there was that time with Larry Niven’s ‘Ringworld’ that scientists read his book and came back with all that math that was fed into later novels.

Ultimately, if you just double the time travelling, you’re not going to be far off. Remembering how Heinlein did this with ‘Time For The Stars’ so a twin on Earth could keep in contact with his sibling on a starship, it looks like I came to the same conclusion independently. I haven’t violated known science and Einstein won’t be spinning in his grave on my account. Take the light years travelled and multiply by two.

As my story is all about it being as quick to travel to a colony planet than to send a message back than I’m not violating any current known science. As travelling beyond the speed of light is still not seen being beaten, I’ve even accommodated the SF writers purists by staying within known science as an added bonus. ‘Course, how the colonists have really solved a volcanic problem I never disclosed but that would fall under advanced technology and actually be possible as our knowledge of molecular science is nascent now but likely to be advanced centuries down the line. If anything, it also indicates that colonists are unlikely to sit on their hands and wait for a helping hand from Earth as Jim Cameron did with his film ‘Avatar’ for a similar period of time. When you see how far we’ve come in the past couple decades, this would be applied knowledge of our reality. I might not say this outright in the story but the implication would be there. The ultimate decision of taking the technology where it would be needed first is just a logical step. You’re hardly likely to send it to Earth when another volatile colony planets might need it first.

What makes Science Fiction literature more effective is that unlike film it is not there for an instance two hours gratification but is often there to make you think about the decisions that are made. It doesn’t necessarily mean you pick up on all these kinds of details but one thing that Science Fiction has going for it is consistency within the confines of a story. If it jars, then you’ll know it doesn’t feel right. If it hits the mark, well, only you can decide on the quality of the story.

There is a need for science in Science Fiction. A lot of the time, people don’t see the amount of work that goes into making sure a couple sentences about it are correct in the story but you’ll feel it in your bones if it doesn’t feel right. Anything after that is just applied logic.

December 2012, even though I hadn’t left an active link to my email address, it got solidly attacked and then blocked from everyone, including myself. By necessity, having a form of open contact to me comes as part of the editor’s job. I’m still seeking reviewers and new material so follow the paths through the website and go where no spam-bot dares. I’ve yet to see them write anything. Humans and aliens can apply, providing they live in the UK. Monsters need to prove they can read and write. We could do with some reviewers who like fantasy right now. Don’t be scared of the instructions, you’d be surprised how easy it is to learn. So, if you want to contact me, build these words into an email address: gfwillmetts at hotmail dot com  I won’t bite. We might not be able to pay but 90,000 hits in a month means you’ll be seen by a lot of people.

Don’t forget to check out the SFC Forum for where companies have their stands at this year’s conventions and for book signings.

Observation: The predator hunters will not attack two sorts of people: the unarmed and film crews. Carry a fluorescent green marker pen and you’ll have a friend for your short life. Old hunter gag.

Observation: I often wonder why there are no books about the mediocre films but there are probably too many of them.

A Zen thought: How can there be a heaven and hell when there is dementia which gives the latter to all earlier? 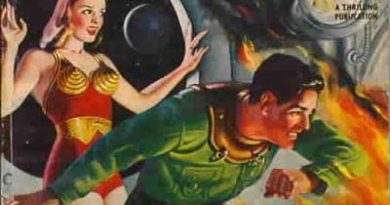 Editorial – December 2013: Category be thy name.

Editorial – December 2013: Category be thy name.