There are times when it is difficult to draw a line between near future SF and contemporary fiction. Technology moves on so fast that it may well overtake the events of the story and it becomes a recent past, historical novel. However, if the book is well-written, the reader will be drawn into the story whatever label may be current today. This novel, ‘Echoes’, is of that nature and it is a very worthy winner of the 2016 Rubery Award For Independent, Small Press And Self-Published Books. Not only did Laura Tisdall receive a substantial cash prize but she also got an introduction to an agent. While it might be difficult to decide what category this book is in, it has undoubted quality and touches on issues relevant to today. Above all, the author is not afraid to tackle things often left out of young people’s thrillers. As the main characters are sixteen, this could be classed as either YA or for teens but, like Corey Doctorow’s ‘Little Brother’, it is just as enjoyable for a reader of any age. Also, like the Doctorow novel, the characters are immersed in modern technology, but that is where the similarity ends.

Mallory Park is a kid who has had to grow up fast. Since her mother left, four years ago, she has struggled to keep her family together. Her father, Roger, suffers from PTSD from his time in the Marines and there are times when he only remembers to go to work because Mallory nags him. Her young brother, Jed, has problems at school with bullies because he is small and a typical target. He is also dyslexic, so struggles with school work. Mallory feels it is her job to encourage him as well as making sure they all get good, nutritious meals and had to teach herself to cook. Mallory may sound like a paragon but has her own problems. She has social issues and doesn’t like to be touched. Friends are something she lacks and tries to avoid crowded places so the rough-house of school is daunting. She makes herself go as an example to Jed. The only time she feels confident is when she is locked in her bedroom with her computer.

Mallory is a hacker. There isn’t a system she has found that she can’t break into. The problem always is getting out again without leaving any echoes of having been there and certainly no markers that could lead to her. She has been recruited by The Asker. He, at least she assumes it is a he, gets members of the team to acquire information corporations would rather stay hidden. That is later leaked to the media or onto the Internet. Mallory knows that what she is doing is illegal but justifies it by a belief that the information should be in the public domain. Also, hacking is addictive. As part of The Asker’s team, she has a purpose. Then, fellow hackers start to go off-line, leaving no trace. The Asker is worried. Then he disappears from the net.

The only person Mallory feels she can trust is a fellow member of The Asker’s group who goes by the tag of Warden. He could be anyone but he agrees to help her find The Asker in reality. Warden turns out to be a boy her age who flies all the way across the US continent. He is not without his own problems and has an issue with germs and is OCD about cleanliness. However, his parents are not too bothered about him, believing his untruth about checking out MIT as a possible university. Together, they use their skills to try and find out what has happened to The Asker and the other vanished hackers.

‘Echoes’ is not only is well-written and the book well produced, it has a fast paced narrative. The characters are believable and each have their own issues, disabilities that are not visibly obvious but which need strategies to cope with. Mallory and Warden find the kind of courage they didn’t know they possessed in their search for a man they believe is their friend. They know they are facing danger and are also aware that they could be in serious trouble with the law if caught. It is rare for characters with the kind of problems these have to be made central to a novel and to be treated with understanding and sympathy. This is a book with a lot of things going for it and is a delight to read. Well done, Laura. 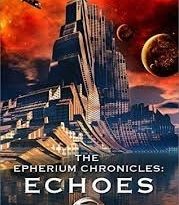