I wasn’t really sure what to expect from Richard Kirby’s book, ‘Desperately Seeking Susan Foreman’ other than the fact that this was a revised edition of his attempt at getting actress Carole Ann Ford’s photo/autograph from ‘Doctor Who’, which is not really a spoiler as he shows it in the opening chapter. His main ambition is to have the autographs of all the living female companions of the Doctor.

Considering that there is only a small number of male companions, you would think he might go for the complete live companion set. Between the two editions, he also notes the loss of Elisabeth Sladen, Mary Tamm and Caroline John, all of which he’d previously collected. Since this book came out in 2013, we have also lost Deborah Watling.

As Kirby also includes his autograph collection here, this book might be seen as a unique volume for those who like to see what these actresses autographs look like, especially in some instances he has more than one of them, and who has the most spidery. I think it’s a toss-up between Billy Piper and Jenna Coleman. 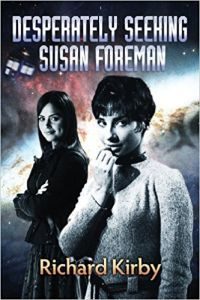 The main text of the volume is devoted to a history of ‘Doctor Who’ interspersed with how he got his autographs and any questions he asked along the way, although he admits he’s not a good interviewer. Oddly, later parts of the book are in less detail. Whether that is to keep within the page count or scant knowledge is debatable. Kirby does admit to a lack of knowledge of interest in the Davison/McCoy era and so there’s an absence of Sarah Sutton and Janet Fielding.

It is a bit odd retro when he refers to Mark Eden from ‘Marco Polo’ later appearing in ‘Coronation Street’ as if it was immediate rather than some 30 years down the line and, I think, even later for the same soap for William Russell. Forgetting that important word, ‘later’ when referring to Georgina Moffet marrying David Tennant doesn’t help matters neither. Is time displacement spreading among Who fans?

I do wonder what the American audience, which is BearManor’s manor, makes of some of the references to British TV series.

It almost seems like a time-out when he devotes a chapter to ‘The Ark In Space’, although he also does this to ‘The Androids Of Tara’ and ‘Blink’.

An odd book certainly. Although Kirby doesn’t explain how he writes to these actresses for their autographs, for those who want to know how, it’s rather simple really in the UK. A lot of libraries have a copy of the multi-part ‘Spotlight’ book. I couldn’t find an Internet display of it. In there, you will find out who their agents, if they are still acting, are who will pass any fan mail to their clients.

Be sure to include a suitably sized and priced stamp-addressed envelope and a particular photograph if you want it signed and politely ask and be patient. As Kirby shows here, you can often get what you want.