Every day is allegedly magical at Mighty Magic Donald’s Food Kingdom. Taco Tuesday has just become more magical with management’s unexpected creation of the Taco Fairy, complete with an avocado wand. This was not the career path Griswald Grimsby had dreamed of. He had wanted to be an Auditor. One of the elite witches with the power and prestige of the Department of Unorthodox Affairs behind him. He had wanted to solve crimes and help people. Not be stuck in a truly embarrassing minimum wage job amongst Boston’s regular population of Usuals. ‘Not Department material’ his assessor had decided. 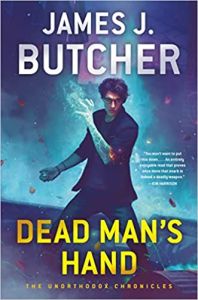 Grimsby’s Tuesday is about to get worse. The witch who doomed him to his lacklustre life is dead. Murdered by means unknown and he is a suspect. With the grudging and surly assistance of the mysterious retired legend known as the Huntsman, Grimsby’s life is about to become all that he had dreamed of. Ready or not.

Let’s just get the obvious out of the way first thing. James J. Butcher is the son of Jim Butcher, who wrote the highly enjoyable and extremely popular ‘Harry Dresden’ series. It has to be said. James Butcher is clearly unphased by following in his father’s footsteps. He has written an urban fantasy crime noir adventure with a wise-cracking hero who tends to get roughed up on a regular basis. Just like his dad.

While the marketing is definitely leaning into the familial connection ‘Dead Man’s Hand’ would be compared to ‘Harry Dresden’, since it’s a wildly popular series in the same genre. Yes, readers of Jim Butcher will find James Butcher’s style familiar but you can find similarities if you read anything in this enjoyable trope-filled genre. Even if you go back to the classic fantasy-less noir of Raymond Chandler. The plot follows a familiar path and does it well.

The magical world is not hidden in this novel. The ‘Usuals’ are aware of the ‘Unorthodox’, a label which apparently includes magical creatures as well as magic users, but seem ambivalent about the whole thing. Magic seems to be outside of their day-to-day lives. Potentially dangerous but rarely making an impact. Rather like a tax auditor.

The magic system feels familiar but does add a few bits and pieces to make it fresh and distinct without being a drudge of exposition. There is a ‘Elsewhere’ that only magic users can see, as is common, but seeing it is not a choice and it is so insanity-inducing that witches must filter it out with masks or glasses. Mirrors are portals into this ‘Elsewhere’, where time is strange. Familiars are creepy combinations of bones, metal and magic.

There are enough tit-bits sprinkled throughout that make me curious about the deeper magical world. Mostly about Mayflower, the man known as the Huntsman. He definitely has the drinking and personal problems of a proper noir detective but I have so many more questions. If there is a Huntsman what does he hunt? How is he working for the Department if he’s not a witch and seems human? I predict that book 2 will be very revealing for the Huntsman.

I resent that any book in this genre is released in hardcover. They are bingeable books that are read in gulps. They are books to throw in a bag for a happy reread while on the go. These are books to be enjoyed and read not to be protected and pretty on a shelf. They are for reading in bed and having to bring the second one with you if you’re about to finish the first on the way to work. Not that that is a problem with ‘Dead Man’s Hand’ as there is currently no book 2 but there will be.

‘Dead Man’s Hand’ was a fun weekend binge of a read. If you like your protagonists full of snark and wisecracks and just a bit bumbling you’ll enjoy Grimsby and his quest to stay alive. He might not be an official private investigator like Harry Dresden (‘Storm Front’ by Jim Butcher) or October Daye (‘Rosemary And Rue’ by Seanan McGuire) but he does his best. Like Bob Howard in Charles Stross’ ‘The Atrocity Archives’, Grimsby is a guy who finds out his big dreams contain more teeth and demons than he had thought.

Unlike all of these other characters, Grimsby is barely trained. Even with his couple of spells he is relatable to us ‘Usuals’ in this magicless world. He does not discover hitherto unknown physical fitness and crime solving brilliance. He fumbles through and does his best. 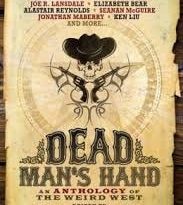