The feasting of the eyes comes to mind when realising the polished opulence of writer-director Guillermo del Toro’s Gothic supernatural production ‘Crimson Peak’. Undeniably luscious and wonderfully bizarre, ‘Crimson Peak’ is a psycho-sexual thriller that resonates with the enticing visual senses and registers with the proper amount of off-kilter seduction and twisted charm. For filmmaker del Toro his unconventional narratives have always been peppered in exquisite bounciness regardless of their hit-or-miss effectiveness. In joining past del Toro genre-ridden offerings that range from the revered cult-like stimulation of ‘Pan’s Labyrinth’ to the misplaced but eye-popping stiffs such as ‘Blade II’ and ‘Pacific Rim, it is safe to declare ‘Crimson Peak’ as another elegant and gaudy candy-coated canvas of del Toro’s imaginative cinematic vision. Aesthetically stunning and armed with a sophisticated lining of suspense, ‘Crimson Peak’ does not necessarily exude any real momentum of toxic scares or memorable chills. Still, it manages to rely on its Gothic-induced romanticism that is enough to accept this splashy and offbeat vehicle on the merits of its unique brand of animated style. Sure, there are displayed predictable paths to tap into ‘Crimson Peak’s erratic pulse and maybe del Toro and fellow co-screenwriter Matthew Robbins could have injected some more convincing bits of subversive edginess to spice up its modest creepiness. Nevertheless, one can appreciate the borrowed Hitchcockian overtones combined with the arresting set designs and peculiar ensemble. This alone invites ‘Crimson Peak’ as a colourful costume drama layered in concentrated showiness.

Thankfully, the October release of ‘Crimson Peak’ should echo the spooky spirit of Halloween appropriately and offer some seasonal sizzle for the macabre-embracing moviegoers. The story may not be startling to the point of an innovative revelation but the winning element, at least one of them anyway, is the exceptional art direction and production design that suitably defines del Toro’s mystifying universe of nostalgic ghostly aberrations. ‘Crimson Peak’ will not be confused with high-minded horror anytime soon but it does effectively promote its lush, Gothic-induced romantic vibes.

Budding American novelist Edith Cushing (Mia Wasikowska, ‘Alice In Wonderland’) has one specific belief system to hang her literary hat on and the sentiment is self-explanatory: ‘Ghosts are real!’ This haunting message has plagued Edith since she was a young girl growing up in Buffalo, New York in the early 1900s. Edith was an only child of privilege and an apple in the eye of her widowed wealthy father in businessman Carter Cushing (Jim Beaver). Naturally, the protective parental instincts kick in as Cushing is weary of an opportunist that might wanting to court his eligible daughter Edith.

Enter the seemingly shifty and broke British aristocrat Sir Thomas Sharpe (Tom Hiddleston). Sharpe has an agenda and it is quite clear. Apparently, Sharpe wants to shop around a potential profit-making mining device and needs financial support and promotion from an influential American contact. Coincidentally, Sharpe starts a relationship with promising writer Edith whose Daddy Dearest happens to be a prominent industrialist. How convenient, huh? The skepticism about Sir Thomas Sharpe starts to mount for the concerned Carter Cushing as he stands by and regrettably witnesses his precious offspring Edith’s affection for the cunning character.

Of course, Sharpe is not the only target that moneybags Cushing needs to worry about as the loving companion to his treasured Edith. Sharpe’s older sister Lady Lucille Sharpe (Jessica Chastain, ‘The Martian’) accompanies her sibling on his mission to do whatever he has planned for his personal gain. So now Cushing has double trouble with the mysterious brother-sister Sharpe tandem as they are embedded in the indelible psyche of the artistic Edith. However, the Sharpes have spun their web as they now have turned Edith into a member of their family as both wife and sister-in-law. Thus, a fresh existence begins for Edith Cushing Sharpe on the other side of the pond in Northern England, where the Sharpes’ Cumberland-based estate Allerdale Hall is located.

Realistically, the less-than-stellar Allerdale Hall is not exactly the ideal venue that caters to the so-called prominence of the aristocratic Sharpes. The vast Victorian house is relentlessly drab and does not reflect the impressive homestead that it should be in status and structure. In making matters worse at Allerdale Hall Edith is restricted from stepping into certain parts of the dilapidated dwelling. Plus, Edith is overwhelmed by the recurring appearances of pesky apparitions that roam in and out of the expansive hallways of the isolated, blood-colored domicile. Lastly, the creaky goings-on is not helped a bit by the drastic change in hubby Sir Thomas’s demeanor as Edith feels duped by his on-going indifference. Edith has to feel uneasy and uncertain about what she has gotten involved with concerning the grasp of the mischievous Sharpes and the life-long warnings of afterlife spirits in the decaying manse that she has been taught to take seriously since childhood.

The sinister symbolism is adequately atmospheric and the erratic pacing makes for some rather genuine, tense moments. However, ‘Crimson Peak’ does show some flashes of being a slight boofest melodrama that undermines its titillating convictions. As an eerie romancer ‘Crimson Peak’ feels a tad uneven. The three-way love triangle pitting Wasikowska’s Edith against both Hiddleston’s Sir Thomas Sharpe and Charlie Hunnan’s Alan McMichael (Edith’s first suitor before Sharpe’s arrival) could have been explored but felt rushed and pushed aside. The whispering presence of shadowy ghostly figures floating about within the decrepit walls of Allerdale Hall makes for some convincing hair-raising hedonism that is compatible with del Toro’s topsy-turvy colour-toned exposition.

Overall, the real scene-stealers behind ‘Crimson Peak’s brightly spry makeup belongs to the film’s handlers responsible for the glossy sheen of this eye-fetching film project. Credit the sumptuous contributions in the aforementioned art design and sets (not to mention the crisp cinematography and fashionable costumes) to propel ‘Crimson Peak’s entertainment value beyond the tepid lapses in manufactured jitters. 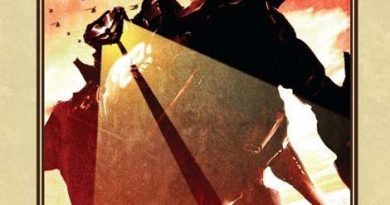 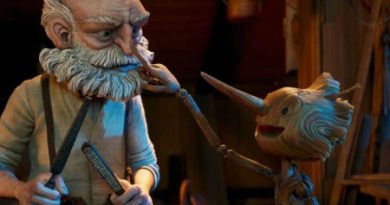