I picked up ‘Creating Special Effects For TV & Films by Bernard Wilkie about 6 years back and only now found time to read it. The name ‘Bernard Wilkie’ should ring bells to ‘Doctor Who’ fans as he was the uncredited special effect man on its very first season.

His credits are far longer. As part of Focal Press’ ‘Media Manuals’, Wilkie contributed two books. Oddly, the earlier first edition ‘The Techniques Of Special Effects In Television’ is actually very expensive although it has been reprinted three times with revisions at a regular price.

You can bet it isn’t Who fans buying this book but those working in the industry. Although CGI is more prevalent today, there is still a need for physical effects and that hasn’t really changed over the years. Wilkie explains simply and with diagrams to achieve a variety of effects and in some instances, it is literally done with mirrors. It’s rather interesting that he points out with remote control devices that he uses two different signals to ensure nothing is accidentally let off. 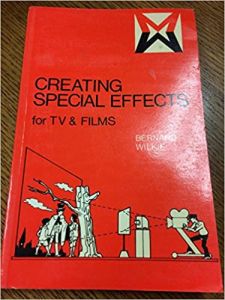 There are a few things I would express caution with, largely because of changes in regulations since Wilkie wrote this book and I hope probably altered in later editions. I’d be surprised if asbestos tape is still used in log fire heaths in TV or film. The same with the use of explosives where you certainly need training and a license to use them. Bear that in mind in any amateur film making.

Don’t expect detailed explanations or TV examples from this book. I can see it being in the pockets of special effects folk to be plucked out for a quick review of what they are doing and making sure everything is going to plan. For those of us who want to see beyond the product, Wilkie’s book provides some useful insight.