Unlike TwoMorrows ‘Modern Masters’ series, they do occasionally do larger volumes on particular people. This is the case with ‘Carmine Infantino: Penciller * Publisher * Provocateur’ by Jim Amash with Eric Nolen-Weathington. Hardly surprising because Infantino moved up through the ranks at DC Comics to becoming its publisher for five years and so a much larger career. 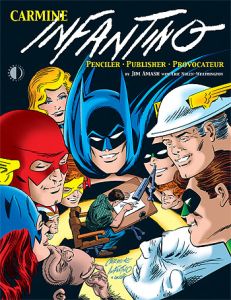 As Infantino relates in his interviews here, he came from a very poor background in New York but had ambitions in art that led him to working at the various comicbook art studios around the Big Apple from a young age. It’s rather interesting seeing him name-dropping but, back then, everyone was new and only the likes of Jack Kirby, Joe Simon and Will Eisner who were already successful were still building their reputations. That was probably within the industry as credits were rarely included in the comicbooks themselves.

Carmine Infantino (1925-2013), like many of them, worked his way up through the ranks, watching other artists and learning his craft. He also worked for many of the comicbook companies back in the 1940s-50s before settling in at National Periodicals/DC Comics. Over a period it was quickly apparent that whenever he drew a cover, it would sell well and quickly became their cover designer. From there, he eventually became DC Comics publisher, although not by being interviewed for the job, more a case of being handed the job.

From reading these interviews, I think I was more impressed by how many character/costume designs he did at DC Comics and introduced the changes there in the early 1960s. The Black Canary, Barry Allen Flash, Kid Flash, the Elongated Man’s second costume, Deadman and the revision to the Batman costume, adding the yellow circle to his chest logo and adding 4 years to Robin’s age when the comic was dying to raise its sales. It might not have been that innovative but that and a certain 1966 TV series helped. The only change he made to Adam Strange’s costume was to give him full sleeves.

Infantino’s comic page design also included word balloons and text placement and responsible for adding the hands to the text boxes. Bob Kanigher created the ring-dispensing costume for the Barry Allen Flash. There’s a lot of side information here. More so as he gives rather candid looks at the various editors he worked for and consequently who worked for him.

When it comes to reading about Infantino’s time as publisher as DC Comics, you do get some candid insights into what running a comicbook company was like. As I said previously, Infantino didn’t even volunteer for the job and was literally put in the seat based purely on his cover designs sold the books. It also forced him not to be close friends that he used to be with some of his fellow artists to avoid favouritism.

More so as he felt he needed to bring in fresh blood and letting go or firing various people, not to mentioning dealing with the egos of editors he used to be employed by. In reading this, I can understand why the management brought in Jeanette Kahn as his replacement as she wouldn’t have to deal with a similar problem. Whether they knew that or not is debatable. When he felt he had to match Marvel for shelf-space, he lost the company a million dollars but he also pointed out that Marvel lost 2 million dollars.

Unfortunately, it also resulted in him losing his job after 5 years and he went back into art, drawing for Warren, Marvel and then back to DC Comics, although he refused to enter their offices again.

It would be hard to miss the cynicism in the later part of his career and he just took the work as a professional rather than enthusiasm. This also gives some insight into what happens when you lose a big job in America. When you bear in mind most comicbook editors come from a writing background not artistic, Infantino was the odd one in the pack.

Looking at Infantino’s art as a whole, he did think he wasn’t given good inkers and rarely allowed to ink his own work. Even so, I did think there were several places where he took the Curt Swan route with barrel-chests, no waist and distorted or smaller legs. He does point out that his work at Marvel benefitted from having better inkers there.

At the back of the book we see his art gallery. On the back of his comicbook pages, he invariably used them for sketches before settling down to the panels. It’s rather interesting how many were of Ralph Dibney without any stretching. Even so, Infantino didn’t keep his original art so would explain why there are so few here and probably not fully representative.

I found this book enlightening and to see things from his perspective. Infantino was very much a loner but not so much geek-like. We only get insight into his professional life and I would have been curious as to how he relaxed. 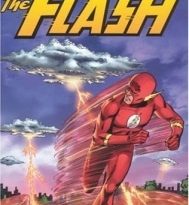