British Science Fiction author James Lovegrove has, over recent years, created his own little sub-genre with the ‘Age Of …’ novels. Each one explores how a different pantheon of gods might interact with modern humans, generally through the prism of military SF. The term ‘godpunk’ has been attached to the sub-genre that Lovegrove has created and the author and publisher have adopted the term themselves for this latest offering in the series, a collection of three novellas each of which were originally published solely as e-books. Does the ‘godpunk’ concept work at this shorter length of story? One thing that’s worth noting before looking at the individual stories is that none of them fit into the sub-genre of military SF within which almost all the previous ‘Age of …’ titles has sat. There are few soldiers and even fewer lasers or spaceships to be found anywhere in this book. Even so, the stories felt instantly familiar to me, suggesting that Lovegrove has very much made ‘godpunk’ his own thing.

The first novella is called ‘Age Of Anansi’ and follows the exploits of Dion Yeboah, a successful black British criminal lawyer. African trickster god Anansi appears to Yeboah one night and persuades him to enter into a partnership, where Anansi gets access to Yeboah’s body while Yeboah gains the benefit of Anansi’s wily ways. This initially works like a charm for Yeboah, who takes on and wins a succession of ever more risky and high profile court cases. However, Anansi eventually calls in his end of the bargain. He wants to compete in the periodic ‘Trickster God Games’ using Yeboah’s body and mind. Yeboah is initially reluctant but Anansi talks him round. They fly to Las Vegas then take a bus to a small town convention centre in the desert where they meet forty-five other humans, each temporarily carrying the spirits of trickster gods from cultures all over the world. The contest is simple. Any contestant who is publicly tricked and embarrassed is eliminated and this continues until the last one standing wins. Yeboah and Anansi think they’ve got what it takes but Anansi’s main rival in previous contests, the native American trickster god Coyote, has other ideas. Can they come out on top?

‘Age Of Anansi’ is enormous fun. The tricks that these gods play on each other through their human vessels are inventive and very amusing, even if some of them are cruel or painful, too. For example, super-fit Yeboah drives three of his fattest rivals out into the desert, nominally on the way to lunch at a fantastic restaurant, then deliberately runs out of petrol in the middle of nowhere, jogs back to the hotel and leaves them lost and stranded in the noonday heat. The story features a large and varied cast of characters and Lovegrove keeps the pace up throughout, all the way to an unexpected conclusion.

‘Next is ‘Age Of Satan’. The hero of this tale is Guy Lucas, whom we follow through nearly fifty years of his life. We first meet him in 1968 as an unhappy teen-ager who is being bullied for being the new kid at his boarding school. When a fellow pupil called Fred Milward offers him a way to get his revenge on the bullies, he jumps at the chance. Guy is deeply uncomfortable to find out that Fred’s plan involves performing a Black Mass to the Devil but, driven by his misery and a wish not to lose the only friend he has made so far, he reluctantly joins in. However, nothing seems to come of it. Eventually, Guy takes matters into his own hands, planting bottles of booze in the bullies’ school lockers and then grassing them up to the teachers, which gets them expelled. When Fred finds out, he warns Guy that Satan won’t be happy to be pre-empted in this way. Perhaps that’s true, but it is Fred who dies the following day in a freak fire in the school attic, a well-known smoking den. An accident or something else?

When Guy goes up to Oxford three years later, a promising relationship with an independently-minded American girl called Molly ends in tragedy after the two of them mess around with a Ouija Board one evening. Devastated, Guy drops out and goes to Thailand to bum around but wherever he goes and whatever he does, his early dalliance with Satanism seems to follow him, stopping him from doing anything worthwhile with his life or is that just him? All of this changes when bolshy punk fan Petra comes into his life. She has a very different philosophy from anyone he’s ever met before. Her mantra is ‘Do unto others as they do unto you.’ In other words, if people are nice to you, be nice to them. If they’re nasty to you, give it back in spades. When Guy finds out that what Petra believes is also known as atheistic Satanism, he finally feels like he has come full circle since that Black Mass at boarding school. The two of them become close and Guy’s life finally seems to be coming right, until the night when Petra is attacked by a gang of drunken yobs and Guy has to decide what her mantra means in practice.

‘Age Of Satan’ was the real surprise for me in this collection. The story is just as gripping as anything else that Lovegrove has written in the ‘Age Of …’ series but it is far, far bleaker. The central character, Guy, has to cope with the deaths of several people close to him while still a young man. His responses, however, are far from heroic and he comes across as weak and suggestible. By midway through the story, he has deliberately become an anonymous non-entity, hiding from life in order to avoid getting hurt by it. This is an entirely understandable response but doesn’t make for a strong hero. However, when Guy meets Petra everything changes. For me, Petra is the real star of this story and her appearance transforms the tale into pure gold. ‘Age Of Satan’ is entertaining and thought-provoking at the same time. What more can you ask?

The collection is rounded out by ‘Age Of Gaia’, a witty take on the battle between big business and environmentalists. It starts brilliantly with billionaire oil magnate Barnaby Pollard having his nose broken accidentally by an eco-protester, who throws a dead seagull in his face to protest about the latest oil spill caused by Pollard’s company GloCo. A PR disaster ensues when Barnaby’s bodyguard Jakob is caught on cameraphone breaking the protester’s nose in retaliation. In an attempt to respond to the ensuing media criticism, Barnaby sets up a week-long PR offensive with five eco-journalists, taking them on a whistle-stop tour of GloCo sites around the world to demonstrate what they are doing to protect the planet, rather than destroy it. Four of the journalists are tree-huggers who drive him round the bend, as he does them. The fifth, freelancer Lydia Laidlaw, is different. She is outspoken and independently minded and, though she’s willing to listen to what he says, she won’t accept any PR spin. She intrigues Pollard from the start but before long he has fallen for her completely, despite the fact that she is the complete opposite of the willowy models he normally dates. The problem is Pollard is used to controlling, indeed dominating, everything and everyone in his life. What will happen if Lydia isn’t interested in being submissive?

I found ‘Age Of Gaia’ extremely enjoyable. Lovegrove pokes fun at both sides of the environmental debate, suggesting that the stereotypes both have of each other are frequently, if not always, wrong. He points out that love can transcend which side of an argument you’re on, while reminding us that everyone has things in their closet or, in this case, their basement that might best be kept secret even from their nearest and dearest. Most of all, though, I loved the pace and energy of a novella which fizzed along from start to finish.

‘Age Of Godpunk’ is another great example of James Lovegrove’s skills as a writer of intelligent, fast-paced action adventure stories. The fact that he is equally adept at writing novellas as full-length novels is a very pleasant surprise. I hope he returns to the form soon. If you’re already a fan of his work, you’ll need little prompting to go out and get this collection. If on the other hand you’ve not read Lovegrove before, this collection of three novellas would be an excellent place to start. 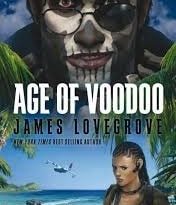 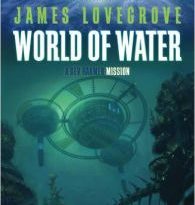 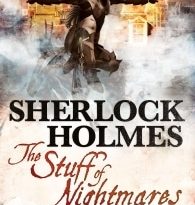 An Interview With James Lovegrove by Patrick Mahon.