The concept of a country that doesn’t actually exist is not new in literature. Anthony Hope’s 1894 novel ‘The Prisoner Of Zenda’ takes place in the imaginary country of Ruritania, identified as somewhere in Europe. Jim Crace’s first book, ‘Continent’, consists of seven stories set in a country that has similarities to South America. Thus, Eli Lee’s debut novel, ‘A Strange And Brilliant Light’, is in good company. 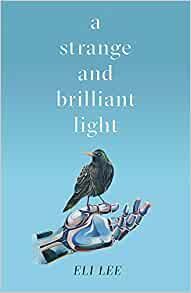 Ulrusa is an imaginary country whose centre of technology is in Mejira. The country is on the cusp of social change. Tekna is a company that has a monopoly on AI units and is putting them into all the outlets it has acquired, which seem to be everywhere and, of all varieties, the bosses keep buying up smaller units. The rate at which automation is sweeping onto everyone’s life has parallel with the tech take-over of our society.

The novel revolves around three women. Lal is the manager of Slurpees, a coffee/ice cream parlour. She has ambitions to work for Tekna and move to Mejira. It is her holy grail. Already some of the staff have been replaced by auts, the AIs that have been designed to take the jobs of human workers. For Tekna, this is ideal as the outlets become cheaper to run. Her best friend, Rose, works in Slurpees as a waitress. She sees the auts as a threat as more and more people are being replaced. The unemployed have no prospect of work as the auts take the jobs. She joins a group agitating for source gain, a payment to all people of working age whose jobs have been replaced by the auts. Janetta is Lal’s sister and is currently at university working on a project to create consciousness in AIs.

Over a year, their situations and beliefs change. Lal gets what she initially thinks is her dream job, working for Tekna. She is based in a dreary suburb of Mejira called Dhont. Her accommodation is basic and she finds that she is amongst a group of uncommunicative employees whose job is to assess the advantages of replacing workers with auts. She is the one making people redundant but if she doesn’t do the job, she will be sacked. Rose, now manager of Slurpees, becomes disillusioned by those she thinks are working towards source gain. Her boyfriend, Alek, seems to have ambitions that do not put the workers foremost and her brother is part of a group who destroy auts, which are quickly replaced. Janetta, on the rebound from a break-up with her partner, Malin, meets Taly Kett. Janetta has long admired Taly’s work on AIs and is thrilled to be dating her. Taly’s work in on animal auts, programming them to be docile, believing that these traits transferred to worker auts will prevent a conflict between humans and machines in the future.

These are three bright, likeable young women who see great hope in the chosen direction of travel, all of whom are disillusioned by the circumstances that cross the paths they have chosen.

Science Fiction has long been regarded as a means of putting across a dire warning about the path humanity is taking. This novel tries to incorporate several of the possibilities of a society run entirely automatically. It was a threat that was mooted as robots began to take of some of the processes in factories. The threat of mass redundancies didn’t happen but as AI technology improves, it could still happen. The activities that Rose’s broth is involved in is reminiscent of the Luddites who destroyed the machines that took their jobs.

Although the pathways the three women take have been considered in other literature, the characters are realistically portrayed and each are following one of the paths a novel about the future of AI in our society could take.

While it is a slickly written and enjoyable novel, it would have been useful to see some aspects of the real world impinging at the edges of this fictional country as it is too human orientated to indicate it is a totally alien world. For it to be that would detract from some of the impact. The auts themselves do not get much in the way of description. Early in the novel is one that appears to be a human facsimile but others appear to be smaller, non-humanoid units. To run a society completely, they would need different shapes to carry out different tasks. Nevertheless this is a very creditable debut novel.