I should point out that the reason I bought ‘When The People Fall’ by Cordwainer Smith was because I spotted some titles in the 28 stories that I don’t think I’ve read and a good opportunity to re-read some of the ‘Instrumentality Of Mankind’ stories again. They aren’t all here.

You need to buy either ‘The Instrumentality Of Mankind’ or ‘The Best Of Cordwainer Smith’ to accomplish that. Oddly, in his introduction, Frederick Pohl mentions ‘The Ballad Of Lost C’Mell’ which isn’t included in this 2007 collection but certainly is a must-read. A quick check has revealed its part of ‘We The Underpeople’ book from Baen, although that is long out of print. At least the stories are still out there. 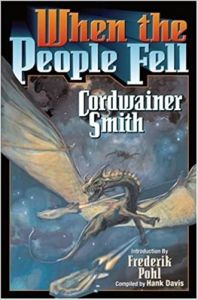 Cordwainer Smith was the non de plume of Paul Linebarger, a multilingual American diplomat and teacher and whose stories took an unusual twist to the future where Germans, Russians and Orientals had a bigger place in the future and the rise of the Under-People, animals reshaped into human form initially as slaves until they revolted. Pohl’s introduction also notes Linebarger used metaphors a lot but they are probably lost after over 60 years now.

He also kept away from the SF community, having gotten writer’s block after meeting people who liked his two non-SF novels, and didn’t want it to happen again. When you read his stories here, you would then appreciate what a great loss that would have been. In some stories, you can see like he’s looking for idea development or laying down the strands for future aspects of his reality. No one has come close to his kind of stories since.

‘The Queen Of The Afternoon’ is one of the important stories and one Smith wrote much later to effectively explain elements of the reality. He hits on pollution and the centuries of resolution to the development of elongated life, you’ll hear about Stroon much later, especially in his novel ‘Nostralia’, the development of the Underpeople, an even lower class of those who don’t look human. If you thought TXT talk without vowels was new, Smith was using it back in the 1950s. Nothing is ever new.

‘Scanners Live In Vain’ are also early emotionless cyborgs used to travel through space and need to be cranched to temporarily get their emotions back. They are also to be replaced with better pilots. Even now, my knowledge of the Instrumentality is coming back and this will give rise to the Go-Captains. Smith was developing his reality. Not a fixed reality at that as it was always evolving.

Reading ‘Think Blue, Count Two’ shows how powerful a writer Smith was. The massively sailed starships have to keep a maintenance crew alive, brought out of hibernation when repairs are needed. A reference is made to a serious problem with another ship, so the beautiful Veesey is prepared with a programmed laminated mouse-brain to provide protection when there is danger. You have to read behind the lines to realise Smith is actually describing rape and murder and, worse, killing those in hibernation. Beautifully crafted and still covers ground few other writers have tackled.

It’s the underlaying of planoforming and pin-lighting that makes Smith’s space travelling fascinating and how he develops it over stories, bonding human telepaths and animals to stalk ‘dragons’ that hinder their interstellar distances but gives levels of battle. Understanding some of the metaphor today, the Go-Captains are the navigators and pinlighters are essentially their weapons has never been repeated since. You really do have to wonder why no one has thought to see Smith’s reality as a potential TV series simply because of its uniqueness.

Undoubtedly, the true nugget of this book is ‘A Planet Called Shayol’. You get a hint of it elsewhere and then you get to watch as Mercer, convicted for crimes against the Empire, is prepared and committed to this penal colony, where organisms attack his body but really make it grow various body organs and parts that can be harvested for transplant surgery. It is a really emotional story that will pull your heartstrings. Bearing in mind Paul Linebarger was multilingual, I googled ‘Shayol’ and it reveals the word is in the Hebrew Bible as a place where the dead go. Having your brain and eyes burnt out are optional.

From ‘On The Gem Planet’ on, we meet Casher O’Neill. His first name comes from his desire to be paid in cash. When you consider the German and oriental aspects of other ‘Instrumentality’ stories, Smith added the Australian aspect. This was divided with the novel ‘Nostralia’ (a contraction of North Australia) and his O’Neill stories exploring this.

Get yourself a free 80 minutes to read the novelette ‘On The Storm Planet’ as Casher O’Neill is marooned there and needs to return to his home planet to remove its leader. However, the planetary administrator will give him a spacecraft if he will kill a girl. As Casher gets more information, he discovers all other attempts fail but he does need to do it eventually and meets T’ruth, a turtle-girl with a mind imprint but also lives up to her name. So much of this story is spoiler but it is atmospheric with even double-dealing that brings these characters to life and affirms Smith’s ability to write compelling stories.

Smith’s non-Instrumentality stories play up his sense of humour. ‘Western Science Is So Wonderful’ has a shape-changing long-lived Martian encountering passing Chinese communists and becoming endeared by them has to be totally quirky and I remember it from long ago. The reactions are fun as the Martian appears what it thinks is appeasing to them and then realise he doesn’t know what it is he’s supporting. Oh, you might also want to look out for a solid gold milk truck in Connecticut.

‘Nancy’ is the answer to what happens if you are the survivor of two pilots of a spacecraft and releases the ordered sokta virus and hallucinates a companion that keeps his sanity. Superb.

I’m not saying all these stories are perfect. Something from how this collection is set up does show Smith did have a theme when it came to pointing out the loneliness of long haul space travel and a need to combat it and this was based off 1950s-60s. The fact that he showed different types of space travel and how his reality didn’t stay still but always evolving, even with a life-extending drug, still places it uniquely above over SF realities. Surely another lesson here is SF realities don’t need to be based on heavy novels but linked short stories and a return to that might help short story writers like myself. Read and enjoy.