Pete Chatmon’s book, ‘Transitions: A Director’s Journey + Motivational Handbook’ is what it says on the label. He details his life with the desire to direct and learning a lot of different skills along the way beyond his time at university.

Even so, it took him time to work out how he had to reapply himself each time he applied for a directing job and decided he had to be the sort of person people would want to work with. From all of this, don’t expect to be an instant director, it’s a lot of work and determination and several years. 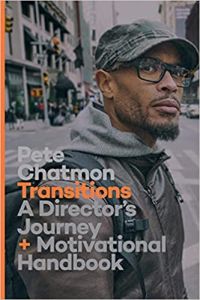 Considering how Chatmon had to learn to accept people he barely knew talking to him on a bus, that only happens in London over here, most of us Brits talk just to pass the time away, so we tend to see that as quite ordinary.

Obviously, this book is American-orientated, but in the film industry networking is important. Looking at how many times Chatmon had to polish his own scripts, I think one important thing to do at any film school is attend as many scriptwriting courses as possible. If you want the control, then understanding the basics of that as well as directing has to be an asset.

One thing that also becomes apparent is as a director you have to take on any work that is available and be pretty flexible. There is also a desire to deciding what you want to do and be able to present yourself to the right people that way. Showing as much diversification as possible should avoid being pegged down to only one sort of work. I think setting goals is important in any profession but, as Chatmon points out, you also need to work out the best way to accomplish them.

Something that Chatmon brings into the dictionary is that shadowing a production should be renamed as an ‘observing director’, where it gives a chance to meet the crew and cast and get to know them and their work as well as working out his own directions as if he was doing it. In UK terms, this is more a meet and greet thing to see if both parties get on. A lesson from this is to do the entire thing just in case the production order is changed, more so if you’re recording two episodes at the same time.

Although I can appreciate the need for contact/network details to be filed, I tend to be nervous in using a spreadsheet for such information. It looks like the likes of Excel has improved on the last time I tried it but its also too easy to be complacent and not select all the columns and you end up with an ungodly mess getting only one column in the right order. With a database, such as Access (others are available), you choose a column and all the rest follow and no nightmares.

The end section of the book has Chatmon interviewing 10 other directors from his podcasts as to how they got into the industry and what they learnt along the way. This is very informative and if you have any desire to become a director, reading their examples from time to time as a means to keep yourself motivated.

This book is incredibly motivational about working your way up through the process and being prepared to go up three steps and go down two every steep of the way. Things are slowly changing for the better for people of colour and women in this male dominated American film and TV industry. You need to be both single-determined and flexible and generally nice to people if you want to make a telling impression. Preparation is the key, continued efficiency and fast thinking the right decisions helps the rest. Read and learn.