‘The Twilight Man: Rod Serling And The Birth Of Television’ by Koren Shadmi is a black and white graphic novel which tells the life story of the determined little chap who eventually produced and often scripted ‘The Twilight Zone’, famed for years as one of the best anthology Science Fiction television series. 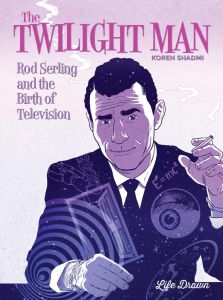 His determination is evident in the scenes that open the story. After a framing sequence in which Rod Serling is passing the time by telling a fellow airline passenger about his life, we cut to 1943, Camp Taccoa, Georgia, USA where Private Rodman Serling, aged eighteen, is lined up with other boys keen to join the newly formed 511th Parachute Infantry Regiment. The Jewish lad from Binghampton, New York was too short, just 1.63 metres or 5ft 3ins but he kept asking, every day and eventually the colonel gave in and let him undertake the training, pretty sure he’d flunk it anyway as many did. He didn’t. His reward was not to fight Hitler, as he wanted, but to fight Japanese in the Philippines. Many died. He was lucky and survived but suffered nightmares and flashbacks for the rest of his life.

It took persistence to get into the paratroopers. It took just as much, maybe more, to succeed as a writer. Serling used his GI benefits to enrol at Antioch College to study literature. On a work/study program, he went to WNYC in New York, then ‘the undisputed Mecca of radio’. To earn extra money, he tested experimental parachutes, which often resulted in injury, but Serling had done some boxing in the army, he was physically tough. Mentally, too, because he kept banging out scripts for television, getting over forty rejections. This new medium was hungry for material and plays were broadcast live, just once, in one take. Writers like Gore Vidal and Paddy Chayefsky were doing well.

Eventually, so did Rod Serling, especially after one script, ‘Patterns’ earned a lot of attention. It was a story about the ethical cost of succeeding in business and when it became a critical and commercial successful film. ‘Requiem For A Heavyweight’ was also well received. Job offers rolled in. Serling acquired a dictaphone and began to produce scripts faster than ever. He smoked faster than ever, too, four packets a day at times. Then he moved to Hollywood and a big house with a pool and all the trappings of success.

He felt frustrated at the boundaries put on material by the corporations that funded the programs. A script about a lynching was toned down so much it became meaningless because they were scared to offend southerners. Other political issues were also taboo. Serling often appeared on television himself railing against the restrictions and became known as an ‘angry young man’. Then it occurred to him that such themes might be smuggled in under the disguise of Science Fiction and fantasy. The rest is television history. Like Gene Roddenberry later, Serling was a fan of the genre itself and knew which writers to seek out for scripts, especially Richard Matheson and Charles Beaumont.

This is a graphic novel told in words and pictures. The first-person narration in the captions is by Rod Serling but it’s mostly dialogue with other people. Although there is no violent action after the war scenes, it’s not just talking heads as Shadmi dramatises things as much as possible with Serling striding around, waving his arms, hurling scripts around and so forth. There are also some abstract drawings to show his mental state now and then. Both the writing and art carry the reader along unobtrusively while communicating the story. It works fine.

As a Marvel child, these non-fiction graphic novels were odd to me at first yet I really like them. So far I’ve learned about the Brooklyn Bridge, Apollo 11 and George Orwell and enjoyed them all. ‘The Twilight Man’ is well worth reading for anyone interested in Rod Serling or the early years of television in 1950s America. I knew something about it from Gore Vidal’s essays but those are mere words. Here be pictures, too!

While writing the first paragraph of this review on 17 August, I stopped to turn on the television to record something. As it happens, It was set on Freeview channel 82, Talking Pictures, which is good for old SF and horror films. Playing right then was ‘Patterns’ by Rod Serling, his first big TV hit. Coincidence or had I entered…The Twilight Zone.