‘The Hunger Games: Mockingjay – Part 1’ arrives on the heels of its pulsating predecessor ‘Catching Fire’ and continues the riveting saga of rebellious Herculean heroine Katniss Everdeen (Jennifer Lawrence) and her animated grudge against the oppressive Capital and the menacing mastermind behind all the political madness in one President Coriolanus Snow (Donald Sutherland). ‘The Hunger Game’s, triggered by the immensely popularised Suzanne Collins’ young adult book series, still feels refreshingly defiant in its cutting edge commentary on anti-Establishment cynicism and the class struggles for freedom and independence. The biting spirit is still intact and a majority of ‘The Hunger Games’ avid followers will still find the wily adventures of Katness Everdeen and her admiring rebels convincingly rousing and antagonistic. However, ‘Mockingjay’ feels as if it has lost a step since the aforementioned ‘Catching Fire’s lingering conclusion. The story feels rather slight and the paper thin payoff may be considered a teasing twister of sorts. Nevertheless, ‘The Hunger Games: Mockingjay – Part 1′ manages to convey an imaginative sense of colorful chaos and wonderment. Some may realise that ‘Mockingjay – Part 1′ is the first half of the final chapter to Collins’ idealistic, bombastic arrow-slinging pretty protagonist. The premise is established following the sorrowful aftermath of District 12’s destructive demise. Now Katniss and her fellow survivors are forced to exist under the grimy underground conditions that is District 13. It is a clear and concise mutual understanding that Katness and the rebels that reside there all have one thing in common: their abundant distaste for the opportunistic Capital. Thankfully, the likes of Katniss’ loved ones in sister Primrose (Willow Shields) and pal Gale (Liam Hemsworth) were able to escape with their lives from the now-destroyed ruins of District 12.

So the challenge is on for Katness and the rebels to join forces and go against the mighty Capital. The sad reality is that the unctuous President Snow has the upper hand. He currently holds captive past contestants of the Hunger Games that includes Peeta Mellark (Josh Hutcherson), a love interest for Katniss. So time is of the essence for the Capital’s ardent foes to strike against them. Pushing to draft Katniss into service to fight for District 13’s cause is their political leader in President Alma Coin (Julianne Moore). President Coin surprisingly teams up with roguish former Gamemaker Plutarch Heavensbee (the late Oscar winner Phillip Seymour Hoffman) to urge the cunning and crafty Katniss to bring her fighting athleticism to the forefront and lead the suffering districts to attack the Capital and make a notable name for themselves.

With nothing to lose and plenty to gain, Katniss agrees to become District 13’s ‘Mockingjay, a symbolic label expressing the hope and prideful stance of Panem’s oppressed masses. Sure, Katniss may be the recommended answer to the punchy inspiration that Panem needs when launching an all-out civil war against the corrosive Capital. Still, the dastardly President Snow will stop it at nothing to ensure that his government will remain vigilant in keeping down the rising peasants that dare to usurp his structure of power and prominence. Katness has the support of the District 13 minions looking for her to revitalise their voices to be heard by the conniving powers-that-be. Plus, it helps that she is guided by the trusted personalities such as mentor Haymitch Abernathy (Woody Harrelson). Nevertheless, Katriss is still haunted by the loss of her beloved comrades in the games, a psychological and emotional scar that persists inside her battle-tested psyche.

In many ways #The Hunger Games: Mockingjay – Part 1′ satisfies its obligation to the audience by merely being the bridge that nostalgically connects ‘Catching Fire’, while looking to further the curious exploits in the upcoming installment. This is all fine and dandy but one cannot overlook the potential for ‘Mockingjay’ being more than just a convenient big-budgeted blueprint in a much-anticipated worldwide box office film franchise. No doubt the kinetic excitement and visual vitality is there for the senses to endure with astonishing relish. The Oscar-winning Lawrence has never been so radiant and revealing before as the on-screen sleek siren commanding attention in this stylised Science Fiction actioner. Filmmaker Francis Lawrence dutifully makes ‘Mockingjay’ more of an aesthetic launching pad for the next entry instead of telling an intriguing story that can stand on its own merit without consciously awaiting the next wave of Katniss Everdeen mania. The passion and playful dynamics are still evident in M’ockingjay’ that resonates steadily and sharply. But one also comes away with an element of incompleteness en route to the ultimate payoff that begrudgingly lies ahead.

The important factor is that ‘The Hunger Games: Mockingjay – Part 1′ builds on its promise to provide conscientious escapism for the topical fodder that holds so much truth in the disillusionment of authoritative scrutiny and societal disenchantment in today’s political climate. The feisty and progressively festive approach to ‘Mockingjay – Part 1′ still makes it an artistic feast for the soul. 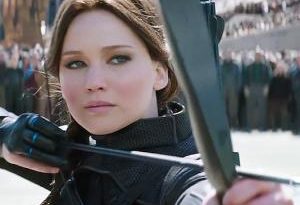 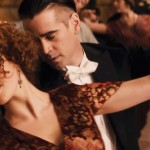