The Interdependency began a thousand years ago when the first Emperox, Rachela, united humanity’s far flung settlements. Each space station, moonbase and planet needed the others to survive but practicality does not forge an empire, so Rachela also founded a religion. Rachela’s prophecies have guided the rather secular Church of the Interdependency and helped bring the distant communities together with something more than commerce. No other Emperox has had visions. Until now. Candenia, now Emperox Grayland II, has addressed the Church as leader and offered up prophecy to warn of the coming Collapse of the Flow. Politically, things are about to get messy. 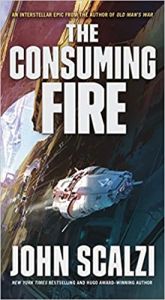 Cardenia’s position continues to be shaky. Few trust her judgement, given that she was raised far from the royal court and the political capitalism of the noble houses. The assassination attempts may have stopped with the imprisonment of the cold-blooded political shark Nadashe Nohamapetan but the plotting has not.

The Collapse is proceeding according to Marce’s mathematical models. In his concern for the closing of pathways, he neglected to predict for pathways opening. A pathway has opened, briefly, to a station lost to Flow collapse six hundred years ago. Studying what remains might offer insights into what will happen to the present day Confederacy. What they find is nothing like they expected.

‘The Consuming Fire’ is the second book of Scalzi’s ‘Interdependency Sequence’ and picks up right where book one, ‘The Collapsing Empire’, left off. Space is still mind-bogglingly big. The Flow is still collapsing. The expedition to the lost station brings both of those facts front and centre.

Following Cardenia’s efforts to save her people continually reminded me why I never want to rule the world. Herding suicidal cats is probably the closest analogy. Shaking people until they decide to save their own lives, frustratingly, does not appear to be an option. The expedition to the lost station was a panacea for that frustration, tempering the political convolutions with a more classic ‘boldly going where no man has gone before’ vibe. Even more new characters appear on the expedition but I couldn’t be mad at them. These practical science and military types were a wonderful juxtaposition to the madness of politics in the Interdependency. I wanted to skip ahead to these sections but am glad I managed to restrain myself as I get the feeling all these threads are about to knot up spectacularly.

There are still too many long complicated names and too many characters. Even the ship names are ridiculous and are possibly a reference to the equally ridiculous ship names in the Culture novels. The ones in Culture are funnier. Here they seem to take themselves more seriously. It got to the point where I was hoping for some ‘Games Of Thrones’ style thinning the herd to help keep me on track but, alas. Instead, I got unexpected survival and more characters joining the fray. Knowing my luck, my favourite Lady Kiva would be the one to go. Kiva still remains alive and one of my favourites, especially when she is ‘translating’ political manoeuvring into simpler terms in her own earthy style. While many ships are lost, many characters continue to complicate things.

There isn’t much science exposition in this series, which is beautifully explained as a core part of the plot, only three people actually understand the physics of it all. This is a problem when trying to convince people that an apocalypse is coming. It’s also a problem when sending things out for peer review, even if someone could fully understand it, has been forbidden by the late Emperox. Peer review is a fundamental part of the academic process.

Other experts in your field can check your work, consider your findings and different opinions can be put forward. Peer review is very important particularly when predicting the end of a civilisation that has lasted for a thousand years. One of the three physicists who understand the Collapse was already ousted in book 1, due to a mathematical error. The agreement of the other two physicists does not mean, however, that they are entirely correct.

With the widespread media coverage we have of the pandemic and its vaccines this is an important message. The pandemic has brought the scientific community together, sharing data and results from all over the world. It is very unlikely multiple vaccines would soon be available with that community. We are not putting our faith in an individual genius but many. I just wish Scalzi’s scientists had the same opportunity, but that would make for a less epic novel.

I compared book 1 to Ian McDonald’s ‘Luna’ series and James S. A. Corey’s ‘The Expanse’ series. I can only compare book 2 to the same series, as it just follows on seamlessly from book 1. ‘The Consuming Fire’ is a wonderful sequel to ‘The Collapsing Empire’ and I am eager to start on book 3, ‘The Last Emperox’, which was released in hardcover in April this year. 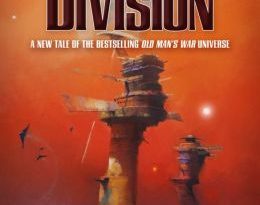 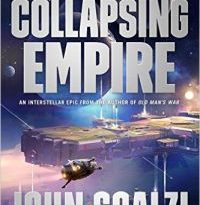 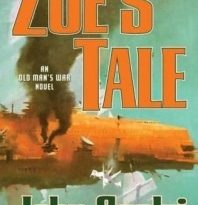