‘The Companions’ by R.A. Salvatore is the first book in a new series from ‘Forgotten Realms’ called ‘The Sundering’. Each book is penned by a different author and will explore the events of the Sundering from various points of view. Salvatore’s entry continues the story of Drizzt Do’Urden and the title is a call to hearts or to be slightly more or less dramatic, an answer to prayers.

The book opens with a glimpse of Drizzt, whose fate at the end of ‘The Last Threshold (Book XXIII, Neverwinter Saga, Book IV)’ was uncertain. He is at Bruenor’s Climb, a lone mountain in the middle of Icewind Dale that is meaningful to the Companions. The peak has marked many beginnings. We continue to hear from Drizzt throughout the novel, in the usual series of thought-provoking journal entries. I’ve come to think of them as letters to the reader and those included in ‘The Companions’ are amongst the most stirring. He reflects on his life and the choices he has made, his friends and companions, the meaning of love, honour and loyalty. There is a sense Drizzt is preparing himself for the inevitable and that urgency underscores the journeys of the Companions as they embark on a quest unlike any other.

‘The Companions: The Sundering’

Yes, I said the Companions.

R.A. Salvatore and Wizards Of The Coast have been tight-lipped when it comes revealing the actual plot of ‘The Companions’. Considering the title, it’s not hard to understand why.

Bruenor, Catti-brie, Regis, Wulfgar and Drizzt are known as the Companions of the Hall. Firm friends, the dwarf king and his adopted daughter, the halfling and the barbarian, the dark elf and his astral panther, Guenhwyvar, adventured together for over twenty books until fate teased them apart, one by one. Wulfgar fell away first, but not forever. He returned a changed man and his journey for peace rivalled Drizzt’s own. Catti-brie and Regis were victims of the Spellplague and Bruenor fell sealing the Great Primordial in Gauntlgrym. The long-lived dark elf, Drizzt, was left to mourn his companions and to make sense of the world they departed.

While Drizzt, one of the most enduring fictional characters of our time, is compelling on his own, it is or was his companionship with Bruenor, Catti-brie, Regis and Wulfgar that gave each adventure such emotional depth. Representatives of different races, philosophies and fighting styles, these five formed a bond that was tested and tested again. Together, they proved that friendship, honour, loyalty and love could win out over all. Sounds trite, doesn’t it? It’s not. Such values are the core of any novel about companions who defeat the odds and Salvatore writes them very, very well.

I’m not going to give away much about the plot. I think the book deserves as little preparation from the reader as possible, even if the title is full of promise. Briefly, the Companions meet again, in Iruldoon, a ‘heaven’ created just for them by Meilikki and they are given a quest. Drizzt needs them and they can choose to help him. Such is Meilikki’s gift to the drow she favours.

‘The Companion’s is utterly absorbing, surprising and wonderful. I have never read anything like it and I’ve been reading R.A. Salvatore’s books for years. There are stories within the story, threads of past and future. The book can be taken as both a beginning and an ending. It’s an ode to Drizzt and the bond of friendship, honour and loyalty. It’s about choices and interpretation.

I loved this book. Really loved it. I had a difficult time putting it aside to deal with life. I shed a tear at the dedication and more than a few toward the end. ‘The Companions’ is everything a fan of Salvatore and the Legend of Drizzt could hope for and more.

There are six novels planned for ‘The Sundering series’. They are as follows:-

The Companions by R. A. Salvatore, featuring Drizzt Do’Urden

The Godborn by Paul S. Kemp

The Adversary by Erin Evans

The Reaver by Richard Lee Byers

The Sentinel by Troy Denning 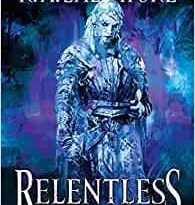 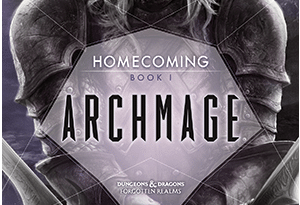 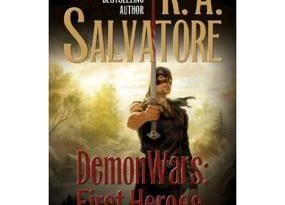