Graham Masterton is an experienced master of British horror writing, having published his first novel, ‘The Manitou’, in 1976 with more following on a regular basis ever since. He also writes thrillers and crime novels. So I was surprised to realise that I’d never read any of his dozens of books, whether in the horror or any other genre. Having had the chance to correct that failing with his latest horror offering, ‘The Children God Forgot’, I think I’ll be visiting his back catalogue very soon. 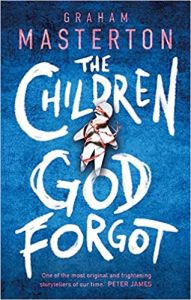 The story is set in south London in the present day. It starts with an apparently ordinary incident, as Peckham resident Chiasoka Oduwole has a minor traffic accident on her way to pick her daughter up from primary school, bumping into the bus in front of her at low speed. The reason for the shunt is a sudden attack of severe stomach pain. Passers-by call an ambulance but the poor woman passes out before it arrives.

When she wakes up in the local hospital she’s greeted by the news that she is pregnant, something she refuses to believe since her husband left her months earlier and she’s not had sex since. Even more alarmingly, when the doctors scan her womb, they find that the foetus is horribly deformed, extremely unlikely to live and needs to be removed by Caesarean section immediately, as its violent movements are putting her life at risk.

Meanwhile, elsewhere in Peckham, drainage engineer Gemma Bright is examining a huge fatberg that is partially blocking the main sewer which runs under that part of London. She asks her boss Martin Elliot to accompany her and two colleagues down into the sewer so he can see the scale of the problem for himself, ahead of authorising the cost of the works that will be needed to get rid of it. However, half-way through their inspection of the fatberg, all their lights mysteriously go out. As they’re getting their bearings in the pitch black tunnel, they see several deformed childlike figures, apparently glowing in the dark, coming towards them. Panicked, they rush back to the manhole they climbed down and get out, only to find that Martin is no longer with them. They go back down to look for him but to no avail.

When Gemma makes a missing persons report to the police and mentions the glowing figures they saw, Detective Sergeant Jamila Patel and Detective Constable Jerry Pardoe get called in. Fans of Masterton’s recent novels may recognise those two names, as Patel and Pardoe featured in his 2018 novel ‘Ghost Virus’, where they had to investigate a set of deaths involving demon-possessed clothes. Senior officers in the Metropolitan Police now appear to see the pair as their first port of call when anything seemingly supernatural occurs.

Back at the hospital, the doctors remove the deformed foetus from Chiasoka’s womb and are appalled to find something that resembles a large spider but with the face of an angelic child. They are about to euthanise it when it cries, just like a baby. Unsure what to do, they put it in an incubator and set a nurse to watch it while they consider the options. However, when the nurse pops out for a minute to go to the loo, the foetus disappears. Soon enough, detectives Patel and Pardoe are asked to investigate this case, too.

As if the situation wasn’t weird enough, Martin Elliot turns up a day later. The good news is he’s alive. The bad news is that someone or something has sawn off both his legs above the knee and gouged out his eyes. Shortly afterwards, Chiasoka’s foetus also reappears, having somehow managed to implant itself in the womb of a second woman who was at the same hospital, recovering from a miscarriage the previous day. Meanwhile, two more women encounter deformed foetuses that want to use them as surrogate mothers, while Gemma’s colleagues continue to encounter inexplicable events whenever they venture down the sewers.

The number of weird happenings taking place in Peckham within a few days overcome Patel and Pardoe’s reluctance to accept they’re on another supernatural case and they get to work. What’s the link between Martin Elliot’s kidnapping by glowing children, his later brutal disfigurement and the deformed foetuses with a will of their own, turning up in the hospital and elsewhere? Whoever or whatever is making all this happen, can Jamila and Jerry stop it in its tracks before anyone else gets hurt?

Although there are several important supporting characters, the duo of DS Jamila Patel and DC Jerry Pardoe are central to the story. They make an odd couple as DS Patel is a highly professional, modern British Asian woman while DC Pardoe is a traditional white male copper who talks and acts like a throwback to the 1970s, reminding me at times of Detective Inspector Jack Regan, memorably played by John Thaw in the ITV series ‘The Sweeney’ (1975-78). It’s a partnership that shouldn’t work, yet it does. They complement each other professionally and there’s a personal chemistry between them which overcomes their cultural and social differences.

As for the story itself, it rattles along at a rate of knots and Masterton’s long-honed writing skills shine through in the effortless prose. The subject matter is, at times, pretty horrific but the violence and gore is always put into context with little to no material included solely for shock value.

The setting of south London is authentically portrayed, grounding this supernatural thriller in an everyday reality which makes the more gruesome moments seem even worse by contrast. There’s one particular scene, exactly half-way through the book, where the incidents that have until now taken place in the sewers below explode violently into the suburban streets above. The writing is cinematic in its scope and the sudden intrusion of horror into ordinary life is reminiscent of something you might see in a Hollywood blockbuster.

Not everything worked for me. Gemma Bright had the potential to be an important supporting character as the female lead of a team of sewage engineers. To my mind, though, Masterton has overdone his attempt to make her a ‘strong female character’.

Her boss Martin Elliot is brutally tortured and one of her team is later killed in horrendous circumstances. Yet we see virtually no emotional reaction from Gemma at all. She just carries on being an efficient engineer, providing useful support to Jamila and Jerry whenever they need to go near the sewers. For me, she quickly ceased to be a living and breathing character and turned into a supportive plot device, which was a shame.

Otherwise, though, Masterton gets most things absolutely right. The characters, plot and setting work together to create a believable and enthralling supernatural thriller which kept me turning the pages from the first chapter right through to the final page. If you’re a fan of British horror novels I’d encourage you to give this a try. I loved it. 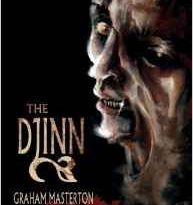