The content of Ian Nathan’s long-titled book ‘Terminator Vault: The Complete Story Behind The Making Of The Terminator & The Terminator 2: Judgement Day’ is given away by its title. I should point out that there is some reference made to ‘Terminator 3: The Rise Of The Robots’, ‘Terminator: Salvation’ and ‘The Sarah Connor Chronicles’ in the final chapter, but this book focuses on director Jim Cameron’s work on the two films and why they have sustained their life since their first release.

There is a lot of background detail, not only about the films but about the people involved. Jim Cameron shows he’s a geek like us, after being influenced by ‘2001’ when young. It’s also fascinating how he never forgets the people he worked with, giving them jobs with or in his films. This is paired with a need to recognise some people are better for some parts than others. Bizarrely, although he found it easy to place Schwarzenegger as the Terminator and seeing the short list for people to play Kyle Reese is fascinating, although ultimately the dictates of price ultimately swayed his decision. Among the extras envelopes in the book, there is a reproduction of the Sarah Connor photo taken in the desert. It isn’t the future, so hasn’t been burnt yet. Although it hadn’t occurred to me to wonder who until now, the voice on the phone breaking his date with Sarah was none other than that of Jim Cameron himself. Watching the film again after reading the book, I couldn’t help but wonder that in the police station where Sarah was being shown Reece’s interrogation on tape that Cameron has a lookalike of himself in the background. It’ll make you a little paranoid if you think the first cop the Termination 2000 kills in the second film is a lookalike as well but that’s all it is. Then again, although the book says Schwarznegger trained so he didn’t blink when he fired an array of guns, on closer inspection, he does actually flinch a little when he shoots Ginger in the first film and after he had his CPU turned on to record in the second film, often blinks, although out in the desert I guess that would be a normal reaction. Maybe I have sharp eyes or even Terminators need to keep their eyeballs clean.

We’ve all taken the success of ‘The Terminator’ for granted but discovering that its film studio didn’t know how to market it let alone give adequate promotion wasn’t something I fully understood until this book. If anything, it does indicate how word of mouth from people like us SF geeks and media magazines that brought it to everyone’s attention. Schwarznegger might have been rejoicing in his star status heading ‘Conan’ but to people like me who weren’t into fantasy and hadn’t seen it, treated ‘Terminator’ as the real introduction to him. Even so, I suspect with all the ingredients of time travel and robots, we’d have all given it a look regardless of who was in it. Again, we get reference to Harlen Ellison’s two ‘Outer Limits’ episodes and even a gagging writ prevent either Ellison or Cameron talking about the subject for a decade of the connections after the pay-off. Just to add something else to the mix, I’m surprised neither of them had seen a Michael Rennie film from 1966 SF cheapie called ‘Cyborg 2087’ which uses similar ingredients.

Moving onto ‘Terminator 2: Judgement Day’ and pre-preproduction, it’s interesting seeing Cameron even considering having Schwarznegger playing both robots and or having a female robot as another option, although that came later. The liquid metal robot was needed as a direct contrast to Schwarznegger’s build and the nascent CGI provided the means. We look at CGI as commonplace now and I hope none of you forget that both ‘The Abyss’ and ‘T2’ were the ones to show its potential just over twenty years ago. Granted CGI would have happened eventually, but it is these two Cameron films that led the way. There is a lot of behind the scenes material of how Schwarznegger and Linda Hamilton prepared for the films, especially in the use of firearms. Jim Cameron describes himself as a blue collar director and his education through Roger Corman’s studio made sure he had hands on experience at everything and probably explains why he’s such a perfectionist knowing how far he can push to get what he wants. As far as the films go, this is a great read and a lot of great photos. If I had to be critical, then I wish there had been more about the merchandise that has evolved from around the films, mostly because this is something that has never been ignored in other Vault books and would show how much this has got into the public consciousness and even the more kid-orientated stuff considering how they would be too young to see in the cinema. In the meantime, I think this book has been a reminder that I needed to watch both films again and as you can tell from some inserted comments spotted some other details, include a boy on a trike outside the Terminator’s first assassination that also appears in ‘Aliens – Special Edition’, that I have in the process of editing this review. Any book that gets you to re-watch the films they are writing about is always a good sign. 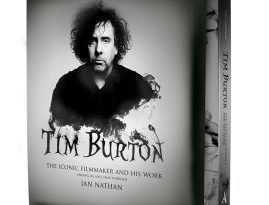 Tim Burton: The Iconic Filmmaker And His Works: Unofficial And Unauthorised by Ian Nathan (book review).

Tim Burton: The Iconic Filmmaker And His Works: Unofficial And Unauthorised by Ian Nathan (book review).