‘Redspace Rising’ is Brian Trent’s action-packed SF thriller brought to us by relative newcomers Flame Tree Press. I was surprised to discover on opening the cover, that this book is the second in the ‘Ten Thousand Thunders’ series, following on from Brian Trent’s previous novel ‘Ten Thousand Thunders’. As I started reading, I could see how it could be a sequel. There were plenty of references to recent Martian history, wars and revolutions but the plot itself didn’t seem to depend on previous knowledge.

Having looked up the earlier book, it seems to be in the same setting but a different character, so it would seem they can be read independently. At the point of writing this intro, I’m only 100 pages into the book, but I’m already sure I’ll be seeking out the earlier volume soon. 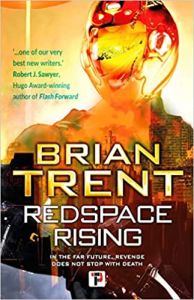 Set on a future Mars that has been terraformed and colonised, the book opens twenty years into a civil war where rival factions, the Partisans and the Stone Order, battle to control the planet which earlier seceded from Earth control. The action-packed opening, enhanced soldiers and profusion of technologies reminded me of Jeremy Szal’s recent ‘Stormblood’ books or John Birmingham’s ‘Cruel Stars’ series.

What I thought was particularly outstanding about the plot of this book is that Brian Trent is not afraid of taking risks and throwing in a curve ball to catch you off guard. Even when I was left momentarily confused by the next scene in the book, there was always an internal logic and consistency to what was happening. In a society where people have gained practical immortality by having their ‘Saved’ minds downloaded into a fresh body when necessary, there is plenty of scope for things not to be as they seem. What if a mind is downloaded into a different body? What if somebody’s mind is somehow changed? Can anybody trust their memories or believe that anybody is who they say they are or believes what they think they believe? The ramifications of the technologies employed slowly become evident and weave themselves through the plot.

There’s plenty of interesting background, too. A long history of war and destruction, colonisation of the solar system, a renaissance of civilisation, revolution and war. All of this history informs the plot, as Harris Alexander Pope, undercover agent working as a Partisan special ops soldier, becomes embroiled in a desperate mission to bring a final end to the twenty year war on Mars. We’re dropped right into the action from the start and led on a nerve-shredding journey of infiltration, terror and destruction.

Pope barely takes a breath between missions to recover before old enemies resurface and he embarks on a series of operations to hunt them down. Each time I thought I had a handle on the overall situation, new information would come to light to change things around. I never got the impression that this was done just for the sake of a complex plot, but each startling development flowed along with implacable logic.

It would be easy to classify this book as military SF, but the plotting, the espionage and the technological ramifications make it a particularly smart brand of military SF, full of energy and verve. I shall now go and look for the other book in the series.