‘Piranesi’ by Susanna Clarke, the long-awaited follow-up novel to 2004’s fantasy epic ‘Jonathan Strange & Mr. Norrell’ has finally arrived and is very much worth the wait. It is a haunting mystery with a winsome hero that creates a very compelling read. 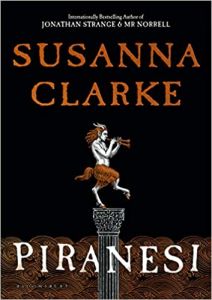 The set-up is deceptively simple. Piranesi has always lived in the House. This is a massive, seemingly infinite collection of halls where classical statues are piled one on top of the other in huge rooms. The lower halls are flooded with sea water, the upper halls covered with cloud. There are tides, it rains, just as if the British Museum had been half submerged in water, but extended in height, hundreds of feet into the air. Piranesi spends his time between surviving and cataloguing.

He fishes, makes nets and clothes and keeps himself warm and fed. He also records in his notebooks the statues he finds in the halls of the House and attempts to divine the meanings that they have for him. Piranesi’s only companion in the house is The Other, who he meets every Tuesday and Friday for a conversation. The Other is engaged in top secret research trying to understand the ‘Great and Secret Knowledge’ of the House and enlists Piranesi’s observational skills to help him. It has seemingly always been this way, but now Piranesi is beginning to doubt The Other’s project and even the House itself…

Ordinarily, I would present a spoiler warning at the top of this review but frankly the enjoyment from this novel is found in uncovering the mystery, so I’m not going to spoil the novel’s plot here. Suffice to say that what unfurls over 245 pages is a very satisfying story that once again borrows both from occult history, but also touchstones of English fantasy.

For a start, the book is prefaced by a quote from ‘The Magician’s Nephew’ by CS Lewis. As luck would have it, I’d just finished reading this novel to my seven year-old son, so was fresh enough to find the comparisons between the locations in that book (The Wood Between Worlds, Charn, Narnia) and the House in ‘Piranesi’. Some of the statues in the House also bring to mind not only Lewis but also Tolkien, who had a knack for including huge sculptures inside his epic, often abandoned locations of Middle-Earth.

The House, like Gormenghast in the trilogy by Mervyn Peake or the palace of Gloriana in Michael Moorcock’s novel, are fascinating fantasy environments. Gigantic buildings, the true dimensions of which are likely unknowable, fascinate me in fantasy writing. I am sure my obsession with the TARDIS also has something to do with it, too. The House in ‘Piranesi’ is, while not described as ‘alive’, creates the idea that there is some sentience attached to it, at least as viewed by the lead character. The House also appears to affect memory, in much the same way the wood does in Robert Holdstock’s ‘Mythago Wood’ or in fact the real world does on the children who visit Narnia.

If there’s any criticism to make about ‘Piranesi’ is that it feels relatively light compared to the epic size of ‘Jonathan Strange & Mr. Norrell’ which came in at around 780 pages. However, I am hoping this makes Clarke’s writing more accessible for newcomers, friends have told me they were put off reading her first book due to its size. ‘Piranesi’, though, enables its reader to concentrate, along with the hero, who recounts the story in first person, on the here and now.

The impression you get is that you make Piranesi’s decisions with him and that also because of that focus on the immediate, being in the House can at points feel like an exercise in mindfulness. It is also powerfully a story about loneliness and the need for human contact.

The less you know going into ‘Piranesi’ the better. Clarke has created one of the most evocative and atmospheric fantasy stories that I at least have read for a while. It is to be savoured and best enjoyed one chapter at a time, giving yourself time to reflect on where Piranesi is, mentally and physically, before progressing. This is recommended reading from one of the world’s best fantasy novelists. 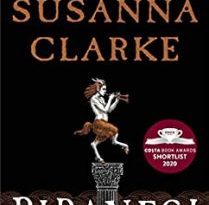