As likened to an innocuous fairy tale rash, the movie mythology surrounding J.M. Barrie’s classical kiddie character ‘Peter Pan’ comes and goes when it pleases. Naturally, there have been several big screen interpretations to outlast one’s reserved stash of pixie dust to fling around. From perhaps the best known animated film adaptation of Walt Disney’s nostalgically revered version to the surprisingly big-budgeted Steven Spielberg-directed spectacle dud ‘Hook’ with a high-caliber cast the legend of ‘The Boy That Never Grew Up’ seems to spark the challenge of presenting yet another spin on Barrie’s iconic treasured tyke. In director Joe Wright’s sci-fi fantasy action-adventure ‘Pan’, the familiar factors of Barrie’s magical Boy Wonder are evident and should serve as a mild and manufactured revisit to the ‘Peter Pan’ folklore for children of all ages. However, the whimsical aspect of ‘Pan’ was dubiously over-shadowed, over-produced yet curiously understated in its ability to convey a storytelling moment that did not seem laborious. Consequently, ‘Pan’ feels mechanical and never quite settles in with any sense of breezy charm or youthful balance of wonderment. Instead, the audience is left wondering about the uniqueness and distinctive approach to an already ubiquitous serving of Barrie’s celebrated literary lad. Despite the vibrant visuals and the given big screen blueprint for ‘Peter Pan’s endearing legacy, Wright’s toothless tale of flashy action and adventure may just prove to be another proverbial flash in the ‘Pan’.

Clearly, there is no rhyme or rhythm to tamper with the built-in concept of what the majestic make-up for ‘Peter Pan’ should be conceived in the minds of generations that were subjected to Barrie’s boundless boy. Still, Wright and Jason Fuchs fail to capture any fresh imagination or intrigue about the puppy dog-eyed youngster’s on-screen by-the-dots adventures. This pumped-up project is pedestrian at best and nothing more than another sparkled rung in the ‘Peter Pan’ ladder of box office hits-and-misses. The casting for ‘Pan’ is decent enough but the shoddy material they are left to elevate with their included presence is wasted in a stillborn fantasy odyssey that cannot overcome its own creative indifference.

‘Pan’ seeks to start out with its own embedded twist by delivering this narrative as a prequel set in 1940s London. Here, we are introduced to 12 year-old Peter (Levi Miller) whose disillusionment continues to spiral while staying at the chaotic Catholic orphanage he was unceremoniously dumped off courtesy of his desperate mother (Amanda Seyfried). Nevertheless, Peter maintains some semblance of hope that his mother will soon return to fetch him and all should solve whatever abandonment issues he has at hand.

Soon, Peter and his fellow orphanage buddies will succumb to the clutches of Blackbeard the Pirate (Hugh Jackman). Evidently bad boy Blackbeard had been a notorious busy beaver by sadistically kidnapping working class children and shipping them off to his Neverland mines to toil there. However, Blackbeard and his bunch cannot be too bad to tolerate since they welcome out-of-the-blue snappy sing-a-longs to such noteworthy tunes as Nirvana’s ‘Smells Like Teen Spirit’ and the Romones’ ‘Biltzkrieg Bop’. Huh? Of course this impromptu musical sequence is not the only thing that seems curiously out of place in the disjointed ‘Pan’.

It is not long before the plagued Peter meets and becomes attached to a hustling drifter named James Hook (Garrett Hedlund). Yes folks…it appears that ‘Star Wars’ comparisons are in order here as Peter’s Luke Skywalker teams with shifty Hook’s Han Solo to defeat the devilish Blackbeard’s Darth Vader. And you might want to ask who is the Princess Leia in this disguised ‘Star Wars’ premise amid the mines and high seas? Well, in this case’ Princess Leia is in the form of Pan’s Tiger Lily (Rooney Mara). Thus, the gang assembles together in an attempt to thwart the iron fist of Darth Vader…er…the diabolical Blackbeard. The excitable exploits of the crew coming together to defeat the pesky pirate is meshed together with the flashy flourishes of random 3-D special effects, the vitality of colour and scope and playful variations of well-known ‘Peter Pan’ personalities. Hence, all the festive and feisty flexing that ‘Pan’ demonstrates still cannot compensate for a lackluster execution of Wright’s anemic installment that botches a ready-made backstory for ‘Peter Pan’ enthusiasts.

As Peter, Miller shows some solid and impish promise as the boy searching for self-discovery in a bizarre surrounding of despair and disappointment. Jackman’s over-the-top villainous Blackbeard is simply passable but nothing really worth hanging your hat on. Jackman’s plotting pirate will not make anyone dismiss Johnny Depp’s Captain Jack Sparrow from the ‘Pirates Of The Caribbean’ movies anytime soon. The added elements in supporting players such as Hedlund’s Hook and Mara’s Tiger Lily and not to mention the Lost Boys feel synthetic and arbitrary–something not very encouraging as these characterizations are essential to the whole ‘Peter Pan’ universe.

Unfortunately for Pan, one might end up saying never mind to the boisterous yet aimless shenanigans situated in Neverland. 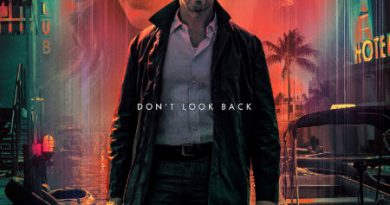