It’s a long time since I read ‘20,000 Leagues Under The Sea’ by Jules Verne, so I don’t remember a great deal about it. Admittedly, it’s even longer than that since Jules Verne wrote it in 1870. ‘Nemo Rising’ features the return of Captain Nemo and the Nautilus, as well as more sea creatures, marvellously advanced technology and dodgy seamen. With shipping from several nations being destroyed off the coast of America and the U.S. government taking the blame, President Grant releases Nemo from prison and asks him to hunt down whatever mysterious force is haunting the sea lanes. 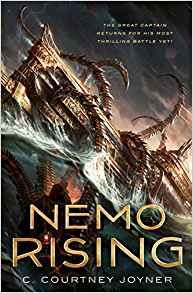 Although the book feature’s Jules Verne’s creations, it does not appear to emulate his style, though of course readers of English translations are probably not getting a taste of Jules Verne’s true style. The writing does not take a formal Victorian style, though, and there is far more graphic violence than one would expect from a period piece. Half-way through reading the book, I discovered that C. Courtney Joyner is primarily a screenwriter.

I experimented with a spot of screenwriting myself at one point, only enough to understand some of the particular formatting rules, which explains some of the other odd things that I found slightly disconcerting in this book. Characters are mentioned by name as though they had already been introduced, making me feel as though I had missed something and unnamed characters and inanimate ‘Objects of Significance’ are given unnecessary capitalisation, such as ‘Guard’, ‘Whaler’ and ‘Diver’.

There’s also a lot of choppy scene-jumping and switching to focus on different characters within a scene, as though the author was envisioning it as a movie and was invisibly including camera angles and other directions into his prose. Much of the dialogue is indistinguishable from character to character, written as if the actor portraying them was to imbue them with individual style rather than making the characters stand out by their speech. Once I realised the author’s background, this all made more sense and became less jarring, but it still didn’t explain the numerous hyphenated verbs scattered through the text, such as ‘pain-dragging’, ‘snap-pounding’ and ‘pain-wincing’.

You get a good sense of the grandeur of the ocean and of the magnificent and intricate design of the Nautilus as you read this book. There’s also lots of high-tech Victorian gadgetry, a lot of which seems far too advanced to convincingly appear in this setting. A laser rifle, for example, seems to be stretching credulity rather too far, as does the phono-tele-photo, aka videophone. At least the latter has a pseudo-Victorian sounding name, whereas the term ‘laser’ wasn’t coined till the 1950s, so Nemo’s device should really have had a newly-coined retro-name.

The book was enjoyable enough, full of adventure, explosions, sea creatures and fantastical machinery. My overall feeling in the end was that it read more like a film where more attention had been paid to the special effects than to the plot. Watching a film in two hours gives you less time to analyse the flaws, but reading the book over the course of a few days left me dissatisfied with lots of loose ends that didn’t seem to tie together. You’ll be much more satisfied if you’re looking for a spot of escapism than if you’re looking for an authentic sequel to Jules Verne’s classic.