Having watched the 1984 ‘Sheena’ film the other night, I can settle down to read the book, ‘My Adventures With Sheena Queen Of The Jungle: The Making Of The Movie Sheena’ by Yoram Ben-Ami. Since I paid attention to the credits, there was an immediate recognise that Yoran Ben-Ami was its producer, although director John Guillermin was already in place. Columbia’s parent Coco-Cola Company had money frozen in Africa where they had to spend it.

The ‘Sheena’ screenplay had been idling for 9 years. Ben-Ami’s agent took him to the meeting, telling him to tell them that he’d been to Africa and spoke Swahili but was ultimately honest and still got the job. Columbia wanted someone who could work with the headstrong Guillermin and not be intimidated. In Kenya, Ben-Ami met someone he knew who had a connection to contact its king who wanted tourist trade back and things started to work. 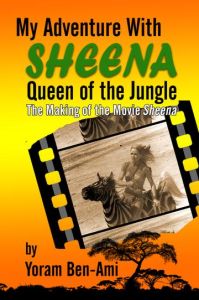 Seeing how a producer puts a film together in budgeting costs and even knowing it’s likely to cost more than the estimates given to the owners must feel odd but probably needed to get the green light and a commitment to film. As it turned out, from a budgeted $14 million dollars, ‘Sheena’ was made for $20 million dollars plus another $9 million dollars promotion and made $5,778,353 gross world-wide before sales to TV and video. I’m not sure about the last figure because it looks like a loss although Ben-Ami points out its Hollywood accounting.

When I watched the film, it wasn’t hard to recognise that Sheena’s zebra mount was a horse in stripes but as Ben-Ami points out, you can’t train zebras. All the animals used were imported from the States because they needed to be trained and certainly not wild. Most of them also stayed in Kenyan national parks after the film because regulations wouldn’t allow them back.

The detail of making this film with 3 units in Africa and all the problems does show how much work goes into making it. Ben-Ami makes a point that ‘Sheena’ made Kenya viable to make films there, not only by its own people but bring in other productions like ‘Out Of Africa’ (1985).

Ben-Ami writes well and engaging and gives insight into how a film on location is made and you are literally there. There are also lots of black and white photographs and details about the film. More than enough to keep anyone who liked the ‘Sheena’ film happy.