‘Metaparadise’ is a huge epoch and galaxy-spanning story. The hero is Alvin. He is a tech and business genius, whose inventions attempt to elevate human kind above and beyond their biological limitations. This has the unfortunate effect of catching the attention of hostile colonising aliens called the Annunaki, who have their sights firmly on Earth and its human treasures. It falls to Alvin to secretly develop Earth’s technological riches and societal resources to assemble a secret space-faring army. Soon, Alvin realises he will have to control humankind to effectively save them all. 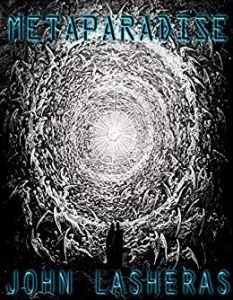 I love a good space opera and I think John Lasheras does, too. What he has produced here sadly falls short. I applaud his ambition and sense of scale, but this isn’t quite enough. The blueprint of a good idea needs a story to make the brickwork, interesting characters to skim over the rough surface and characters with engaging dialogue to wallpaper over the smooth surface. At this point, the importance of good honest editing to make sure the patter in the paper lines up and there aren’t any paste bubbles. Almost none of this happened during the creative process, perhaps homoeopathic doses of criticism.

The characters were described in a very formulaic way. As each character popped up, their height, hair and eye colour and, if we were lucky, perhaps a word or two about their general demeanour. This pattern reached its peak with the description of a Black General, strictly African-American because the narrative is in the US at this point. He was described as tall, with brown hair and eyes. Now it’s possible that uniform regulations might be relaxed in the near future, but I wouldn’t expect blue eyes and a pink hair rinse.

The next issue was the casual almost careless use of genocide. Early on in the story, a terrestrial race of intelligent reptilian creatures were discovered living under the Earth. The US President thought fighting the Annunaki and Reptilian races would split the military into fighting on two fronts, so decided to destroy the Reptilians absolutely. In context, the subterranean race is discovered and sentenced to death in a couple of pages. The actual war takes a few more pages to be waged, but that’s it. The Reptilians literally add nothing to the plot or overall story. You could argue perhaps that the discovery of this Reptilians race prompted Alvin to develop weapons and anthropomorphic A.I. units to wage the war but this only took Alvin a page of so. Realistically, a couple of months in the lab could have probably produced similar tech. I haven’t touched on Alvin’s rapid adoption of his new role of angel of death. The President told Alvin about the Reptilians and his plans to wipe them out within a paragraph and Alvin agreed to do it in the next one. I can’t imagine Steve Jobs or Steve Wozniak agreeing to wipe out a brand new race on a whim.

A quick note on my use of the term ‘pages’ throughout the review. I read this ebook on a Kindle which was a bit zoomed in. A page so described might be slightly more or less depending on your device settings.

The author’s use of time ‘misuse’ needs a mention. Throughout the story, time passes like no other novel I have ever read. Between the genocide and leading the human race, Alvin also effectively makes humanity immortal. As a result of this there are huge leaps of time I think the record was a billion and a half years in the pause between chapters. More usually, 65 thousand years was the typical interval. Alvin perfected the technology to move suns to keep Earth alive as its increasing series of suns burned out like night-lights at a summer barbecue. As a side effect of this, Alvin, now the emperor of the universe, seems to be devoting more of his tech to keeping the human race chronologically stagnant. Billions of years in the future Alvin tells his son to use his smart phone with built in GPS to find him in a public park. There is a strange little passage when Alvin and his second-in-command, in his evening job as jazz musician, enjoy a quick joint. This section is notable because the cannabis bud has the most vivid and detailed piece of description in the whole story. It might be as much as a whole page.

This anachronistic tech jars a bit. Along the way, Alvin has invented nanotech which is capable of altering humans and growing VR tech in the brain. Surely such devices could grow a tiny little navigation system? Why would you need a fancy future phone to prod with your boring old human basic fingers and point at your dull old animal eyes?

The next area to study is the Lasheras’ use of numbers. We touched upon this slightly with the passage of time but that is just the start. About 30% of the way through the story, the UK is invaded by a communist army of a billion soldiers. Allowing for some population growth, that still would mean roughly 10 soldiers for every British person on the isles. Is that how wars will be fought in the future? Blocking doorways and eating the country out of house and home?

One of my favourite bits of the story is during the takeover of the parliament. There are two characters who are named and executed. In the context, I assume they are political leaders, perhaps the Prime Minister? Who can tell? They are neither mentioned before or after their demise.

Another personal favourite use of numbers is when Alvin’s tower block is taken over by a hundred thousand communist troops. Assume a coach can carry 70 people. This invasion would have taken about 1400 coaches. Having been near the chaos of a football match trying to get 70 thousand people into one part of a city, this strikes me as impossible. I have struggled to organise 20 people to meet up in town and being moved to pull my hair out.

When Alvin works out how many spaceships Earth will need to beat the Annunaki, he gets a total of 300 million. Elsewhere in the story, he says a ship needs a minimum of 10 people to fly. I make that 3 American billion people to train up and build ships for them to fight with.

I haven’t mentioned yet smaller things like Alvin’s son self-diagnosing and curing his mental illness in three lines, never for it to have any effect on the plot in any way. I won’t mention Alvin’s attempts at writing poetry because everyone needs a hobby.

Towards the end of the story, with the Annunaki species wiped out and their client races imprisoned, Alvin takes a few years off and goes visiting Earth’s new planets. He is described as being shocked and surprised that the Annunaki didn’t like being imprisoned on their home planets for 65 thousand years. I imagine that even one of humanities casual genocides might have been a relief.

Herein lies the story’s biggest issue. Lasheras seems to have only a very limited grasp on other people’s wants and needs. I took to screen capping some of the dialogue because I wanted to do it justice. In a scene which is supposed to be moving and dramatic, Alvin has constructed a virtual reality program so he can travel back to talk with his father. Imagine 5 year-old Alvin hearing this from his digital daddy. ‘I know how much you wanted to come to the park and play today. We’re here Alvin. It’s Saturday. Enjoy yourself. Get some exercise. Meet some new kids today and behave yourself! Try not to hurt yourself okay?’

I’m not sure if humans have ever spoken like that. It’s like the author hasn’t heard a conversation or used words in any combination. There are other characters in the story but they are so slightly sketched out and limited that they hardly warrant a mention.

Have you ever tried a DIY project in an attempt to try something new? That is human nature. Many of us will have a mostly brown oil painting or a hung door with a triangular gap along the top edge? This is the feeling you get when reading this book. Lasheras is obviously an SF fan. It seems like he decided to give writing a really good go.

I think a good editor would have said to split this into a series of books and develop the better ideas a bit more. The secret underground species could have been developed. The A.I. warriors are possibly a book in their own. The Annunaki wars would probably have filled a couple more, too.

Going back to an earlier analogy, the bricks of good ideas were dumped in a bit of a heap instead of being arranged to make a nice building. It must be said that the review copy I read might have been an earlier draft with a missing paragraph or key phrase but this seems unlikely. This is not a book for fans of SF or space operas, possibly not for fans of words or humans neither. If you chose to read this book, I have great admiration for you.