Back in my early teens, I read a library edition of ‘The Penguin Book Of Comics’ and was the first time I came across the Daily Mirror newspaper strip, ‘Jane’, where it was pointed out that the day she lost all her clothes was the day the allies moved 6 miles in the D-Day landing. 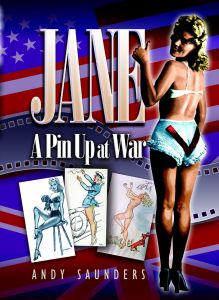 What Andy Saunders book, ‘Jane: A Pin-Up At War’ does is give not only her full history but also of her real life model counter-part, Christabel Leighton-Porter. Back in 1932, ‘Daily Mirror’ chairman Harry Bartholomew thought there ought to be a mass appeal newspaper strip for adults and artist Norman Pett got the job and created Jane and it evolved from there. Jane was a model, often losing parts of her clothes going through various predicaments. Initially, Pett used his wife as his model but as they both felt they needed someone younger, found the perfect model in Christabel Leighton-Porter, a model/actor who posed for Pett to draw.

When World War Two broke out, Jane was the most popular strip and Leighton-Porter’s live performances bolstered the troops and her Equity card meant she never enlisted. As we all know, moral in wartime is important and Leighton-Porter did that in spades, albeit a tad naked but in a tasteful way. I should point out that there are naked photos here but perfectly innocent for its age. The description that Vera Lynn had the hearts of the nation was backed up by Jane was its body seems apt.

Looking at how Jane became the pin-up of all the military forces and painted on aircraft and other transport showed how much a good luck talisman Jane turned out to be. As Saunders describes, she became everyone’s girl-friend and even the readership had female fans, often more than the men. As a newspaper strip, ‘Jane’ faded into the background after WW2 and normality returned but the effect at time, as pointed out in this book, was staggering. It was also daring for its time period as Jane kept losing her clothes although trying to get coverage or lack of it when attempts were made to promote it in the USA led to its failure with their censor.

Oddly, Saunders doesn’t give Jane’s surname which is ‘Gay’ by the way. There is also some repetitions of some of the newspaper strips. Considering that there is a book called ‘Jane At War’ out there, you would have thought there should have been an opportunity for more choices.

As an historical account of both the newspaper strip and life of Christabel Leighton-Porter, this makes for important reading. ‘Jane’ made in-roads at the time and was certainly the first to be seen in the altogether. It might have been interesting had Saunders looked at the future of female leads in British newspaper strips before and after to show how much it influenced future but that’s a minor quibble. From this book, I can see why everyone loved Jane back then.