I’ve read quite a few post-apocalyptic tales and there are certain things you come to expect: bleak landscapes, dust, desperados eking out an existence, rubble and debris. Brian Evenson’s novel ‘Immobility’ has all those things but starts from a unusual position and paints a dire picture of the future that is more bizarre than most. 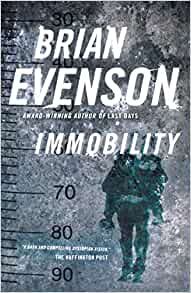 The protagonist, Josef Korkai, awakens from some kind of cryogenic suspension to this apocalyptic future to be told that for some reason he is important to their survival. He finds himself among a dour group of survivors clinging to existence in the shattered remains of North America. The incongruity strikes you immediately: among all of the desolation and desperation, how was the technology still functioning to keep Horkai preserved? Why does the small group need him? He can’t remember who he is and doesn’t remember how he became paralysed from the waist down.

The people he meets on awakening are surreal characters who may possibly have been genetically modified or bred. Although none of it appears to make any sense, it does not fall apart at the seams like a badly thought-out B-movie but intrigues with its incomprehensibility.

As Horkai begins the quest that he has been awoken for, things only become odder. The harsh landscape is full of scenes of mundane destruction and poignant desolation that, even though sparsely described by Brian Evenson, nevertheless strike the mind with a cinematic clarity. Published in 2012, the year that, if you recall, the world was due to end, it feels fresh and inspiring when held up to other assorted post-apocalyptic tales.

By turns brutal, philosophical and poignant, Brian Evenson has produced a unique blend of post-apocalyptic fiction, Science Fiction, thriller and literary novel. It’s not a long book, at only 250 pages, but it certainly leaves an impression. The intensity, the desperation and the pitiless existence of those who Horkai encounters means that this is not a fun read.

I certainly enjoyed the book, though, and particularly the quirky dialogue and literal-minded characters Qanik and Qatik whom Horkai spends much of the novel with. A definite recommendation from me, especially for those who like their post-apocalyptic fiction dark and surreal.