Skip to content
You are here:Home » Doctor Who: Series 12 (or 37 depending on how you count) : Episode 2: Spyfall – Part Two by Chris Chibnall
Doctor Who
January 5, 2020 UncleGeoff 2 min read
633.2k
SHARES
ShareTweet

There is a split as the aeroplane is crashing and the Doctor goes into a mental realm where she meets Aida Lovelace (actress Sylvie Biggs) before both of them arrive in 1894 and a lot of experts from that time period. The Doctor slowly pieces things together and makes the connection but without her TARDIS, she’s trapped in the past. Until she works out what exactly the glowing aliens, called the Carsavans (not quite sure about the spelling but I suspect all of us rapid reviewers are in the same boat) and uses them as a time transit except Aida comes to. 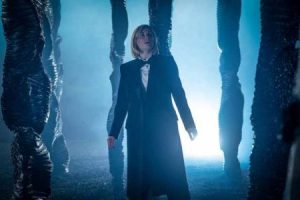 They arrive in Paris 1943 and meet undercover British spy Noor Inayat Khan codename Madeleine (actress Aurora Marion) becomes their alley. Oh and the Master is there as well, a member of the Nazis military with using a deception so he doesn’t look the wrong colour. Interestingly, the Doctor arranges to meet up with him and turns tables on him.

Meanwhile, interspersed with all of this, her friends get instruction to land the plane and are in pursuit of Daniel Barton (actor Lennie Henry), who in turn is after them, turning them into enemies of the state. Oh, Barton doesn’t like his mum. They do have some of the spy toys from MI6 and endeavour to turn things.

The Master also reveals he’s pulverised Gallifrey and things, irked by a discovery he made and no doubt will be seen in more detail in a later episode. There’s a lot of loose ends here and you do have to wonder why Aid Lovelace isn’t one of the spots in time that shouldn’t be interfered with.

You’ll have to watch the story for more because a lot of it is spoiler and I’ve barely touched on that and I’m not that cruel.

Oddly, I think the second part is a lot, lot better than the first episode, practically dismissing much of what was done there with little of the set-up actually being applied. Saying that, you’d be hard pushed not to see some shades of ‘The War Games’ and a touch of ‘Rise Of The Cybermen’ except this time its applied to mobile phones than earpods. Barton seems to be a wasted character at the end of the story with his fate unknown. Not so, the Master, although he always finds a way to escape. 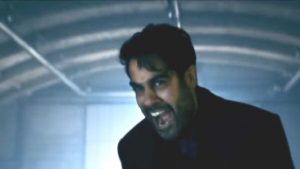 There’s also a puzzle that the Master’s latest regeneration has lived the past 77 years without interfering with his earlier regenerations activities on Earth. That must have been tough. Maybe he should have hidden in a coffin like Jack Harkness did. Mind you, he wouldn’t be what he is today without it but you have to wonder what he did with his time.

A thought occurred to me. As the new Master is now Asian, what should we expect when Jodie Whittaker regenerates on? Oh her black shirt now has black sleeves instead of white.

I was a lot happier with this second part than with the first part although I do wonder if new viewers will understand some of the temporal logic that is going on and filling the gaps later. If there is a failure in that, then it does make for some deux ex machine and I hope that it isn’t used too often to resolve problems after the event.