In ‘Dead Of Veridon’ by Tim Akers, we return to Jacob Burn two years after the events of ‘Heart Of Veridon’ to find him eking out a living as a very minor criminal. His position in the steampunk city of Veridon society is even more tenuous than it was in the first book with Jacob disinherited completely by his nobleman father, Alexander, and disavowed by his former boss, the cogwork criminal mastermind, Valentine. In this sorry situation, Jacob will take any job they can find, but taking one from Veridon newcomer, Ezekiel Crane, proves to be the biggest mistake he can possibly make. 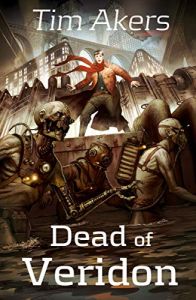 This second Veridon novel proves to be very much in the same vein as the first. Told completely from Jacob’s point of view in the same kinetic hard-boiled style as before, it is another deluge of mysteries, chases and action that are almost non-stop. Where the difference lies is that Jacob no longer possesses the remarkable healing abilities he had in the first book but this doesn’t make him more careful. He still has a penchant for rushing into situations with a fist or a gun, barely pausing for breath or considering his own safety. The fact he does survive seems to be down to luck, the situation and perhaps because he is the main character and everything is structured around him. This doesn’t stop the action set pieces being well-constructed fun, but the joins are definitely showing.

The mystery is just as thick as before. At the behest of Crane, Jacob delivers an item to the Fehn, the undead that walk the river animated by symbiotic slugs and instantly all hell breaks loose. The Fehn attack Jacob’s ship, killing everyone they can and then attack the city itself, causing fear, unrest and ultimately martial law. These waters are further muddied by attacks on the ruling families and the surprise origin of Crane himself and the powers he wields over the living and dead alike.

The cog work technology of the first book is developed further here. Whereby in the first book a special ‘foetal’ metal could be imprinted with a pattern and grown inside a person, in the sequel, the foetal metal is only part of the process with ‘life force’ being an energy that is malleable and can be used more directly. This opens up the mystery of the ancient ‘Artificers’ and the powers they possessed to broadcast their consciousness. Although Jacob comes to think of this as magic, his understanding incomplete, there is a definite attempt to show there is more to the technology than was revealed in the first book and it opens up a wealth of new possibilities.

Wilson, Jacob’s inventor ally from the first book, returns to be Jacob’s sidekick once more, wielding knives, extra spider-like arms and razor-sharp teeth. He seems more developed here, trusting Jacob and unswervingly loyal despite seeming to have little reason to be. He also acts as Jacob’s moral compass, pushing him to help the people of Veridon rather than just look out for himself. In this respect, Wilson is solid, a skilled fighter and implacable friend. But besides Wilson, there didn’t seem to be any other supporting characters that particularly stood out.

Crane the villain, tall and smug, always confounding Jacob by revealing yet another layer to his complex revenge plan to destroy Veridon. He always seems to be surprised when Jacob survives but, at the same time, is manipulating him from behind the scenes. I didn’t really see more than a glimpse of a deeper character, how he learned his skills and where his deep hatred comes from. Camilla, a returning character, is just as haughty, superior as before, a creature of arcane technology at the centre of Veridon religion. This time, she appears to have the upper hand, with her and Crane engaged in a game of trickery and techno one-upmanship. Then there is the mother Fehn, which proves to be an inscrutable bio-computer library that occupies a trapped underwater craft. Crane is seeking to use it and through Jacob, the mother is trying to fight back. I think, because Jacob doesn’t understand the Mother Fehn, neither do we and, because she appears emotionless, it is difficult to empathise with her.

I would say, all in all, the plot is easier to follow than in the original book although there is a certain level of letting it carry you along rather than examine it too deeply. First and foremost, it is a book that is easy to read and is never boring although not as memorable as the first book. The city of Veridon is firmly established with a number of sprinkled reminders of the first book, but doesn’t grow much beyond that, rather the pieces are arranged slightly differently on the board. We get to see more of the council and its internal workings as well as another side of Jacob’s father. The others characters that turn up are more like devices that cause sudden plot shifts, sending the story down a series of dark alleyways where it’s impossible to predict how it will emerge.

What surprised me the most was the very sudden and abrupt ending that made me think my copy of the book was missing a few chapters. The story cuts off and there are so many sub-plots that are unresolved and villains undefeated with the fate of many characters unknown. I don’t know if Veridon was saved at the end but it didn’t seem like it. As such it was like a journey without a destination. A fun journey nonetheless and if you enjoyed the first book it is more of the same, but equally you don’t need to read the first book to enjoy it. I only wish there was more of it as it reminds me of ‘Back To The Future Part 2’ without a Part 3 to tie it all up.