Well, it’s taken three books to get here but the fourth book, ‘Covenant’s End’, could well be the final book for Widdershins as we know her. It’s a fitting, epic final but I’m sure there going to be a lot of fans who are going to hate Ari Marmell for it. For those who are new to Widdershins (where have you been?), she is the thief/adventurer heroine of the series. Set in the the Galician city of Davillon in what we would recognise as a sort of medieval time period, Widdershins returns home. Even her journey back to Davillon is not without incident and requires her to call on her own private god Olgun to enhance her own abilities just to survive. Olgun took refuge inside Widdershins head when all of his worshippers were brutally murdered.

It becomes abundantly clear that something is amiss in Davillon and that the centre of the rot appears to be centred on the Finders Guild. By the way, the Finders Guild is just a polite name for the Thief’s Guild. I suppose they do ‘find’ things but it’s with a little help to make sure that the victims’ have actually lost them. Prior to her wanderings away from Davillon, Widdershins was a paid up member of the guild so does have an interest in what is happening to it. This interest becomes more pronounced when she learns that the guild’s new leader is an old foe of hers.

During their first encounter, Lisette Suvagne was no match for Widdershins but, this time, things are different. Suvagne now has several supernatural helpers that even scare Widdershins personal god Olgun. With her new helpers, Suvagne has swept away the old leadership of the Finders Guild and has ambition to rule the entire City. Even that might be only the start of something much bigger. Widdershins survives her first encounter with the spooked up Suvagne but only just.

Recuperating from her encounter with Suvagne, Widdershins is forced to smooth some ruffled feathers with the people she left so abruptly, after the events in False Covenant. Even the major Houses will have to put aside their petty rivalries as Widdershins is going to need all the help she can get if she’s going to beat Suvagne and her helpers.

I know the ‘Widdershins’ series is primarily aimed at the YA audience but don’t let that fool you. They are very, very enjoyable and I’m not what you would call young. In each novel, the Widdershins character has developed so there’s more depth to her, which makes her more interesting. I suppose this is a reflection of the author’s development as a writer with each book in the series being more polished for want of a better saying.

‘Covenant’s End’ is a good gripping tale, although I did think at one point that it had been done before in ‘False Covenant’. Once you have fought one supernatural monster then another one is bound to be a bit more of the same. As with all the Widdershins novels, there is a personal cost to Widdershins and this one is no different.

There’s quite a few loose threads that could be followed up with other novels in the Widdershins world so there may be more to come. In the very final part of the book, the ‘Authors Afterword’, Marmell indicates he probably will write more but he doesn’t know what they are yet. By the way, the ‘Authors Afterword’ section is very good and well worth a read. Marmell explains his reasoning for the ending and he’s probably just as upset as even Widdershins most fervent fans.

I do think that you have to have read the other three books in the series before reading ‘Covenant’s End’. It draws quite heavily on prior events and might be confusing if you have not been following the series. But having said that, I have enjoyed all four ‘Widdershins’ novels and would recommend them to anyone, young or old. So, go on and treat yourself and get all four books. You won’t regret it. 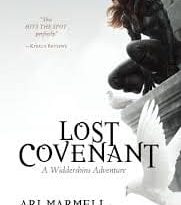