When I was first asked to review this book, I got the impression that it would be full of interviews with mental health patients on how they were treated in the USA. Actually, it isn’t, mostly because most don’t even believe they are ill, although their mental conditions are serious and how they are treated by the system.

Author Lynn Nanos is careful to change names and such so they aren’t readily identified. What she is more concerned with and from her personal experience as an emergency psychiatric clinician in Massachusetts is in the failings of mental care over there. She is one of the few clinicians brought in to assess people with mental problems who are arrested. Even when she has to section or confine them, many are released back onto the streets, often with no care whatsoever. 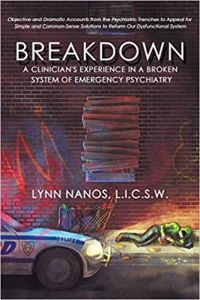 I presume she is seeing people who are brought in without concern to whether they can pay medical bills, more so as many of these people are brought in for assessment or help and many are actually homeless. Worse, a lot of them aren’t aware that they have mental problems until assessed and not even then. These same people, because of human rights issues, are just as likely to walk out when left unsupervised if left alone. When you consider some are hearing voices urging them to kill, well, we’ve seen the outcome of that.

No one can even check if they are taking medication and unless they are formerly signed up to a particular drugstore/pharmacy will find their prescriptions thrown away which is a complication when patients are released early. Mentally ill people are also treated as criminals than people needing care. The more you read, the more you will realise that there is something seriously wrong with how American treats its people.

4% of the USA population has serious mental problems but that looks like a small number until I put it in terms of people. Now, currently, they have a population of 328,900,709 and that makes 1,315,602. That’s still a significant number of people and I assume this is based on those who have been recognised as having problems and so presumably must be more whom the system hasn’t caught up with. 29% are known to kill family members and 7% of the general public. The prevalent conditions is schizophrenia, mania and depression. Of 62 mass shootings, 38 were committed by those displaying mental delusional illness.

Nanos also points out that there are few people in her line of work because it does not pay as much as other parts of the medical profession and the number of beds available has also been curtailed so few can be cared for more than a couple weeks before being released. Presumably, this places more of these people in prison instead.

A common problem is delusional mentally ill people who don’t take illegal drugs aren’t aware they are ill, more so if they hallucinate and aren’t taking illegal drugs. Some of the people noted actually actively even avoid food fearing it contains various things which must cause problems getting them to eat beneficial drugs that would help them. Added into this mix are the problems of civil rights and not being able to keep them without being sectioned or locked up. Even then, said people are often released far too early and without supervision because of cost. I did wonder where medical insurance comes into this, especially for the homeless, but only a little of this is covered.

None of this is helped by so many in the mental health professionals have a low tolerance to helping the mentally ill which must surely be counter-productive and makes me wonder why they chose that direction to find work? Which side is the most mentally ill? Added into this mix are malingerers and those who want to be seen as ill. In fact, many of the mental hospitals prefer malingerers because they cause less problems which sort of defeats the object.

This isn’t a book to advocate locking up mentally ill people forever but certainly long enough to be treated properly than simply let them go after a set time. I find it more remarkable that the number of beds available are cut back than ensuring there is enough. Then again, the American health care economy is based on insurance and who can pay than looking after its citizens. People there would rather think that there aren’t people with mental problems. Something to ponder on with the next mass-shooting as I think the statistic seems to be increasing. Also remember that emergency psychiatric clinician like Nanos aren’t safe neither from attack. Her example of 25 year-old residential counsellor Stephanie Moulton being stabbed to death should make you stop and think although I think didn’t help in recruiting staff.

Although Nanos only covers Massachusetts, this isn’t the only American state with a failing mental health system. If you are interested in American mental issues and their treatment, then you really need to read this and if you live in the USA, harass your senators and politicians not to under-fund their treatment.

I’m still a bit unsure as to SFCrowsnest being the right place for this book but Lynn Nanos pointed out that I reviewed another book on mental issues recently and thinks I have a receptive audience out there willing to listen. After reading this book, I think you’ll find if you live in the USA, you should take this problem seriously. Proper mental health-care might actually reduce the number of mass-killings.

3 thoughts on “Breakdown: A Clinician’s Experience In A Broken System Of Emergency Psychiatry by Lynn Nanos (book review).”