At long last, issue number 55 of ‘Andromeda Spaceways Inflight Magazine’ has reappeared from the wormhole and it’s now available for sale. Actually, it’s quite a good issue, so it was well worth the wait. Apart from the fact that I didn’t understand the editorial, which is no bad thing in itself, I thought some of the stories were really good and a bit special. The editorial was all about flashy cigarettes. Should be stubbed out, I’d say, but you’ve got to remember it’s all been contaminated by the wormhole. A recent review of the new version of the movie ‘Total Recall’ had a tunnel going right through the Earth from Britain to Australia. This could be a good idea to send paper copies of ‘Andromeda’ to the UK quite quickly. They might be a wee bit singed but still readable. Also, while on the subject, we in Britain could chuck down all our waste products, including carbon dioxide, radioactive materials and anything else undesirable. May not be politically correct but there was a precedent in the 18th and 19th centuries when we deposited convicts down under. (I suppose I’ll get into trouble now…Only a joke!)

I definitely think that ‘Hammer Fall’ by John Birmingham fits the special category. In this we had Joseph Stalin in a bunker waiting on a test to take place. No ordinary nuclear test, this was some sort of Armageddon weapon and despite the fact that the aged dictator was falling apart, he had hopes that his memory would be stored for posterity. Alternate history in the making, the picture of Stalin was very real and chilling.

Another story that stood out was Stephen Gallacher’s ‘Eternal Flame’. Now, what would you do if the petrol tank in your car never needed filling? This happened to some unfortunate individual in the story. You would think that this would be a fantastic situation but as time went on it began to have drawbacks and eventually became a curse. A well-constructed story, enjoyable, too, but still didn’t ease the pain of filling up at the petrol station.

Tom Holt was the author of a four-part story, scattered in the magazine throughout the other stories. Called ‘Attack Of The Killer Space Lizards’, it had lots of colour coded characters with names such as Burnt Sienna, Terracotta and Magenta. Apart from the fact that this was a bit irritating, it was a good story with a curious sense of humour.

There was a good interview with the British author, Glen Duncan, conducted by Jacob Edwards. His recent works include ‘The Last Werewolf’ and ‘Talulla Rising’. Interesting and worth reading!

I had to blink when I saw a piece called ‘Ashfield’ by Agatha Christie then I discovered it was an excerpt from a 1977 autobiography. In this, the author spoke about a house no more. A reflective piece about life and existence, it was a little gem that echoed through time.

Deborah Kalin’s story, ‘First They Came’, started off on a tram. I knew immediately it wouldn’t be set in Edinburgh where the tram debacle, costing 1 billion, has yet to get running after four years of misadventure. The lady on the tram receives a news broadcast over her mobile about protesters and this reflects on the other travellers. As the journey progresses via elevator and on to work, we discover that this resembles a 1984 Orwellian society but the people behind it are mysterious and one wonders if they are human. From a quiet beginning, the story becomes more and more menacing as it progresses. Another special story which was brilliantly written!

With plenty of other excellent material along that mentioned above, it was worth the wait. Despite lagging behind # 56, when it eventually appeared, # 55 proved to be a thoroughly good magazine, probably the best of the last half dozen at least. However, do not take my word for it. Get it and see for yourself. 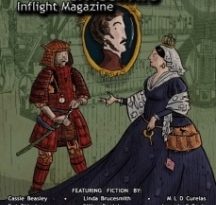 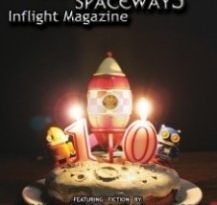 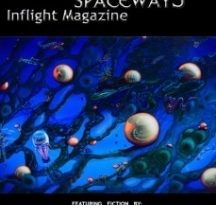