I’ve read quite a few graphic novels featuring zombies over recent years, so my question for any new one is always going to be what’s fresh or different about it. Thankfully, in the case of the latest volume in Arthur de Pins’ ‘Zombillenium’ series, the answer’s clear. It’s set in and around a theme park dedicated to the horror genre and it’s extremely funny! 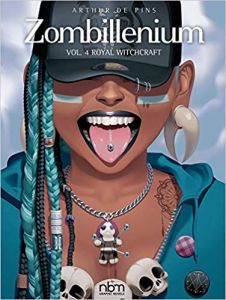 Having said that, I hadn’t read the previous three volumes in this series before reviewing ‘Volume 4: Royal Witchcraft’, so I had to do a bit of Internet research to get a rough idea of what happened previously, before jumping into the new story. In summary, the storyline up ‘til now showed the previously successful theme park running into a few problems. Initially, this was because of their policy of only employing genuine zombies, vampires, werewolves and the like, which created tensions with the local human community where unemployment is endemic. Later on, a fall in profits led to the employment of a management consultant, appropriately enough a genuine vampire, whose ideas for how to rescue the business were extremely mercenary.

As the new book opens, the question is whether the Zombillenium theme park still has a future. The current owner, the demon Behemoth, is tempted to sell it to the highest bidder and decides that the most amusing way of doing so is to run a ‘Witches’ Sabbath’, a magical contest between Gretchen, a teenage witch and demon hunter, who has been the heroine of the series up ‘til now and Charlotte Hawkins, a powerful harpy newly brought in from outside. Gretchen’s skills have previously been unmatched, so she goes into the contest full of confidence.

That is quickly torn to shreds, with their initial encounter ending up as a comprehensive defeat for Gretchen. Indeed, she is only saved from dying on the blades of a nearby wind turbine through the last minute intervention of a friend, the powerful vampire Francis von Bloodt. Faced with this serious setback, Gretchen and her friends decide that if they’re going to save the theme park, they will need to engage in a bit of subterfuge. Can they outfight and outwit Charlotte Hawkins and Behemoth?

This is a highly enjoyable graphic novel for several reasons. What struck me above everything else was the quality of the artwork. Arthur de Pins is a consummate artist and each frame of the story is clear, detailed and gorgeous to look at. His style brings every action scene vibrantly to life, while portraying quieter moments more gently.

Of course, even the best art won’t matter if you don’t care about the characters. In this case, though, our heroine Gretchen is a feisty and empowered young woman who is extremely easy to warm to.

Although I initially found it a little difficult to unravel the plot, having not read the previous three volumes, the storyline in this instalment ultimately made sense and came to a satisfying conclusion.

Cutting across all of the above, though, is de Pins’ dry sense of humour, which lifts every scene and character out of the ordinary, page after page.

‘Zombillenium Volume 4: Royal Witchcraft’ is a fantastic example of a darkly humorous graphic novel, distinguished most of all by the superb artwork throughout. I’d say that it’s definitely worth a try. However, if you’re coming to it fresh, like I did, you’ll probably be best starting from Volume 1 and working your way right through. If you do that, I imagine the over-arcing storyline will make a lot more sense by the time that you get to this latest outing. Alternatively, the first three volumes were made into an animated movie last year, and that’s now available on DVD. That’s probably the quickest way in.