Renowned author and suspected murderer Cassandra Tipp is missing, presumed dead. After a year with no leads, her estate is willed to her niece and nephew, Penelope and Janus, who must follow a very precise set of instructions before they are allowed to claim the inheritance. Drawn to the mystery of not only her disappearance but also tragic events earlier in Cassandra’s life, the brother and sister find themselves suddenly entrusted with family secrets and a comprehensive web of sinister lies. Finding the truth will be no easy feat and when the borders of this reality begin to blur with those of Faery, the truth might just be stranger than the fictions that made Cassandra so famous. 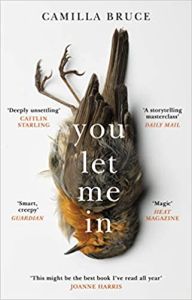 I enjoy reading books that challenge me and that play with the rules and leave me with a sense of something left uncertain. ‘You Let Me In’ is the debut novel from Norwegian author Camilla Bruce and it certainly delivers on the uncertainty front, blending the mundane and the fantastic seamlessly and leaving the reader constantly questioning which version of events is real. I found it quite unusual in style because it doesn’t seek to assert a true reality, fantastic or otherwise and, although this means you aren’t fully immersed in the fantasy elements, something that is normally high on my wish list, it works very well.

Cassandra Tripp is the ultimate unreliable narrator. The whole story is told through a letter from Cassandra to her niece and nephew to be read after her disappearance or death, saying, ‘I wanted someone to know, you see. To know my truth now that I am gone.’ She comes across as fully convinced that her version of events is true but every so often drops in the explanations that other people have put forward to explain how things might have happened if Cassandra’s explanations are in fact delusions. It’s a delightful tease for the reader and I found myself switching between believing Cassandra and thinking she was as nutty as a fruitcake on more than one occasion as the story wove from courtroom to woodland glade, from suspicion of murder to tales of faery children.

SFCrowsnest is a Science Fiction and fantasy site, so while I think this book might comfortably fit in the fantasy/horror section or sit with the psychological thrillers, let me go into a bit more detail on the fantasy side of things. What Camilla Bruce gives us in ‘You Let Me In’ is a tale of a normal woman, with a normal if strict family, who happens to have friends who are faeries. In particular, we learn about her very close companion Pepper Man, prone to acts of terrible violence and who dotes on Cassandra even as he feeds from her. This is not a happy shiny fairyland that we’re shown, but rather one that is old and dark and full of terrible secrets and where every gift comes with a steep price. It sits just on the edge of our reality and those who stray there do not always return unscathed, if they return at all. It’s quite creepy and you can easily imagine the tendrils of darkness reaching across from that reality to Cassandra’s normal world, popping up in all the tiny cracks of her life.

I think that’s what this story ultimately comes down to a woman with many cracks in her life. They might be cracks in her sanity, they might be cracks in reality, but everywhere she turns, the darkness is creeping in. Cassandra’s version of events involves faeries, accidents and unfortunate misunderstandings. Her psychiatrist’s version of events revolves around murder, delusion and psychosis. It’s up to you, dear reader to decide on the real truth.